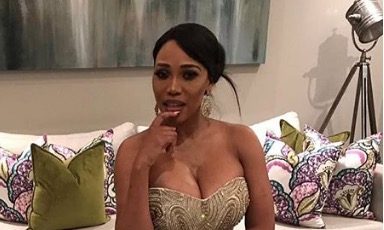 Sonia Mbele will never let herself go back to that place.
Image: Instagram/Sonia Mbele

A few years ago veteran actress and producer Sonia Mbele slipped into a dark hole of depression that resulted in her contemplating suicide.

Sonia was going through a nasty public divorce from businessman Leslie Sedibe at the time.

Sonia and Leslie's split hogged headlines for years, and had a ripple effect on her professional life.

In a lengthy interview with Drum magazine Sonia recounted how people judged her for the messy split and looked down on her.

It all became too much for the former Generations actress to deal with and she slipped into depression.

"I tried therapy but it didn't work. Things got so bad I would even google ways of committing suicide and going out quickly and pain-free because I'd had enough of my life," she said.

Things got so bad that Sonia even thought of admitting herself into a psychiatric hospital after having a panic attack one night.

However, a vision of herself locked in the hospital while her children played outside was a turning point for her and she made a decision to beat the depression.

And ever since then Sonia has put her happiness first.

#happydays #nextlevel #signaturecollection #stepup #nje The reason you see me “dancing for joy” is because I’m working on something I’m highly and super excited about! I’m not going to lie and say it’s been a long-life-dream...but it’s something that bit me recently and I thought 💭 wow Sonia how come you never thought about it sooner...it’s only but the next “step”! So here we are about to unleash...I’m also super excited @renemariane dressed me for this exciting venture. Now please trust that at least 20% of my wardrobe is Rene Mariane...her understanding of design is unsurpassed, her cuts are feminine yet unique, her choice of fabric is pure joy, her love for print is my love for print. So again natural progression all around 😝😝😝

If Kelly Khumalo was a cartoon character, she would have had hearts popping out of her eyes the whole night!
TshisaLIVE
2 years ago

Moonchild on naked club: It's not a brothel. There's no exchange of money for sex

"This is a deal for all of Africa, something we can all celebrate"
TshisaLIVE
2 years ago

Generations' Grace on playing a surrogate: Women feel like they are less & it's wrong

Playing a surrogate mother can be an emotional journey.
TshisaLIVE
2 years ago