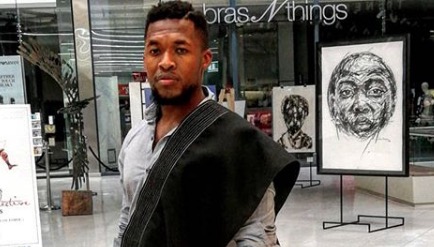 Nyaniso has some strong opinions about men and their obsession with sex.
Image: Instagram/Nyaniso Dzedze

Actor Nyaniso Dzedze, who has himself battled with an addiction to sex has weighed in on the deeper reasons to why men cheat.

In a lengthy Instagram post, Nyaniso shared his thoughts about why men were so obsessed with sex.

The actor's thoughts were ignited after he saw that a couple he followed on social media had split after the guy cheated on his woman.

"There's something going on with all men that they keep making pornography, strip clubs, brothels and the rest of the sex industry one of the highest earning industry in the world. Let's be honest, it's not just for pleasure that we are sex driven. We are sex hungry, and we are sex thirsty."

Nyaniso believes that men are using sex as a coping mechanism.

"Everything is sold with sex and men are the biggest consumers. We are not just enjoying the pleasure of sex We are using sex to cope."

Nyaniso added that this addiction was leading men down a destructive path.

"We need to understand why we are going to sex when we do, and what might actually need to be addressed as opposed to using sex as a veil? I am seeking the most impactful way to address - men cheating - men and the unconscious relating to sex - men and the relationships we have (or lack there of) with our cocks."

Khanyi Mbau on her new gin: I decided to bring joy to the people

The Queen of Bling added actuals edible shimmer to her new gin brand.
TshisaLIVE
3 years ago

He apologised to the person for any offence that was taken.
TshisaLIVE
3 years ago

The streets agree that it looks great, but aren't sold on the name.
TshisaLIVE
3 years ago

Robbie Malinga's wife on other women telling widows 'how to behave'

Ann Malinga has questions over other women who have advice for widows.
TshisaLIVE
3 years ago