Halala! | Cassper Nyovest's album went platinum in a day, just like he said 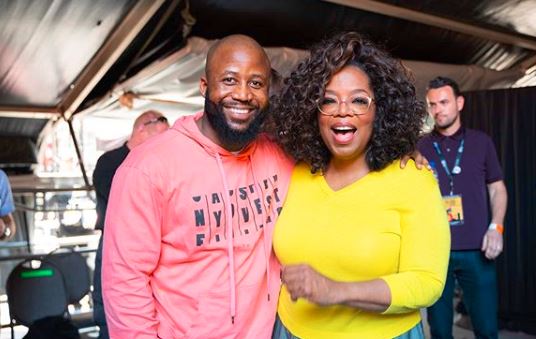 Rapper Cassper Nyovest not only met Oprah, but he filled up Moses Mabhida stadium and released a platinum selling album all in one weekend.
Image: Instagram/Cassper Nyovest

The number of achievements Cassper Nyovest ticked off in one weekend has us all in major introspection mode.

We don't know what your to do list looks on an average weekend but Cassper's one is impressive AF especially because he nailed all of them.

Not only did Cassper #FillUpMosesMabhida Stadium on Saturday, he also met Oprah Winfrey and rocked the hell out of the Global Citizen Festival stage to an audience of over 70k people!

The rapper also released that song with Chris Martin and Stormzy on top of everything.

Oh... and can we also add how he got that six pack and looks sexy.

Cassper also released an EP titled Sweet and Short on Friday, that went platinum in one day. He shared the great news on social media, shirtless of course.

"Shut down two stadiums back-to-back, my album Sweet and Short went platinum in a day. I also released an amazing record with Stormzy and Chris Martin called Timbuktu. This has been an amazing weekend for me. Blessings! God is good. Now I just wanna chill and swim," Cassper said.

Shut down 2 stadiums back to back and my new album #SweetAndShort went platinum in a day. I also released an amazing record titled Timbuktu with Chris Martin and @stormzy . This has been an amazing weekend for me. Blessings!!! God is good!! Now I just wanna chill out and swim!!! #FillUpMosesMabhida #GlobalCitizen #GlobalCitizenFestivalSA. 📷 : @jabukiing

In fact, if we had done half as much as he did in one weekend, we would be booking flights to some remote place to chill till 2019.