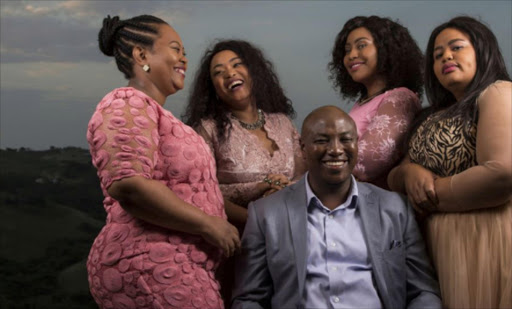 Polygamist Musa Mseleku says it is important to keep all his wives satisfied and happy.
Image: Mzansi Magic/Facebook

Reality TV star and polygamist Musa Mseleku has responded to criticism of his latest single, amidst claims he has a vendetta against some Zulu radio stations.

In his song, Izibongo Zika Musa Mseleku, Musa claims that some Zulu radio stations have been biased against him and his lifestyle.

Musa explained to TshisaLIVE that the lyrics came from his frustration at not getting support from these stations in his hometown.

"People have asked me about this and I just want to explain. There's a part in the song that reflects on the fact that we have never been interviewed by a popular Zulu-language radio station since we came into the spotlight. People have asked us why that is, so I decided to include that question in the song."

The proud polygamist first shot into the spotlight when he and his four wives gave Mzansi the reality show Uthando Nes'thembu. The show aims to teach people about polygamy.

The businessman has also written a book on the subject and said he didn't understand how people who are supposed to understand his culture and traditions could look down on him and his family.

"I don't really know why, but what we've heard from people is that it was the time at which we were airing on TV that started the discrimination. We were apparently taking viewers away from big SABC productions to paid TV. So, they cited that as a reason.

"The other was that they were not fully in favour of the lifestyle that we were living, which I found contradictory because they are supposed to be all about Zulu traditions and cultures."

A new season of Uthando Nes'thembu will air on TV screens early next year, and Musa told TshisaLIVE he was looking forward to watching fans' reactions

For now, his family would continue to try and teach people about their lifestyle. No matter who is for or against them.

Kelly Khumalo and Chad da Don are seemingly set to tie the knot.
TshisaLIVE
2 years ago

TDK Macassette is here to put some colour into gqom music

Tumi Morake on putting her very personal experiences in jokes

The comedian uses comedy to help her cope with trauma in her life.
TshisaLIVE
2 years ago
Next Article