'Do not hurt yourselves' says Netflix as blindfold #BirdBoxchallenge trends 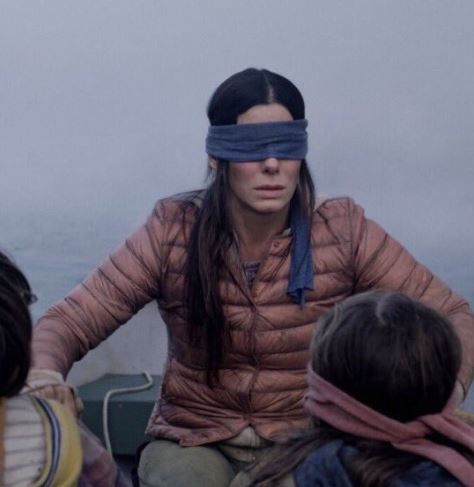 Netflix has urged fans to not hurt themselves as the #BirdBoxchallenge gains momentum.
Image: via Twitter\ @AaronJGould1

Netflix has cautioned fans about the Bird Box challenge as many fans have resorted to blindfolding themselves in line with the theme of the movie.

Can’t believe I have to say this, but: PLEASE DO NOT HURT YOURSELVES WITH THIS BIRD BOX CHALLENGE. We don’t know how this started, and we appreciate the love, but Boy and Girl have just one wish for 2019 and it is that you not end up in the hospital due to memes.

Bird Box mania has has taken the internet by storm since the sci-fi thriller premiered in late December, with many jumping on the hype.

Bird Box is set in a post-apocalyptic world where a mysterious force drives society to commit suicide. Malorie, played by  Sandra Bullock, sets out on a blindfolded journey to safety with her two children, named Girl and Boy.

The characters are blindfolded to protect themselves against an evil presence that prompts them to commit suicide should they remove the blindfold.

Directed by Susanne Bier, the movie is based on the 2014 novel by Josh Malerman.

In the spirit of Bird Box, fans are sharing videos of themselves blindfolded pretending to be characters in the movie.

Netflix expressed concern that the challenge could lead to harm and cautioned fans to avoid it. One of the videos shows a toddler running into a wall while blindfolded.

Y'all doing this #Birdbox Challenge? pic.twitter.com/Yjx86Ex55f

This is it for the #birdbox challenge😂😂😂😂😂
How "Beyoncé" giggled sent me😂😂😂 pic.twitter.com/hmpWrHgUdy

Yet another internet challenge
Netflix's latest hit 'Bird Box' inspired some people to do things in blindfolds. Netflix even issued a warning on Twitter: ''PLEASE DO NOT HURT YOURSELVES WITH THIS BIRD BOX CHALLENGE'' pic.twitter.com/DWwSwLR71q

Netflix's newest postapocalyptic thriller has spawned thousands of memes on social media - but only the parents of small children and teens will ...
Lifestyle
3 years ago

Bird Box mania and the memes that took over the internet

Comparitech conducted tests to see how easy it is for outsiders to access US Netflix content.
News
3 years ago