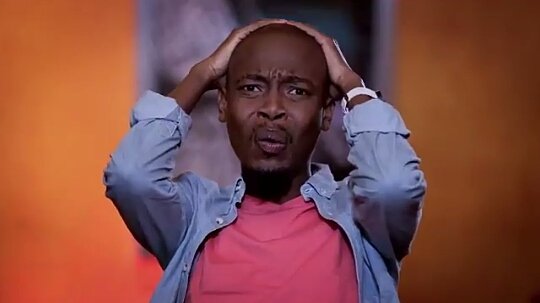 Moshe Ndiki is a host of 'Rea Tsotella'.
Image: Via Twitter

We've all had to sacrifice some things when a relationship ended badly: a t-shirt, a pair of pants and maybe even a pet. And then you get Thabang who after his breakup with his sugar mama kept her jersey and refuses to give it back.

The pair, who have been fighting since Fikile decided to up and leave Thapelo decided to take their drama to Moja Love's confrontation reality show Rea Tsotella.

Some people just don't want to let go. Thabang is still holding on to his ex-girlfriend's clothing even though she has moved on. His sugar mama (Fikile) says it was good while it lasted.

Thabang said when he met Fikile he thought she was the sweetest person in the world but things started to unravel shortly after.

He claimed that Fikile didn't want to hear the relationship was over, while she claimed he refused to return her clothing.

Fans of the show were shocked over the drama and rushed to Twitter to share their thoughts on the episode.

#ReaTsotella Jasey for 1 hour 😟 can we contribute and buy Fikile that Jersey tuu!🙄

Aa @MosheNdiki, love has an age.

This "love has no age" is just pedophiles talk #ReaTsotella

IN MEMES | #ReaTsotella left us so confused... WTH was going on there?

Ad breaks at awkward times and a confused order of events left tweeps scratching their heads.
TshisaLIVE
3 years ago

WATCH | Weaves gets snatched in heated argument on Rea Tsotella

It's like the Jerry Springer of Mzansi as fists fly.
TshisaLIVE
3 years ago