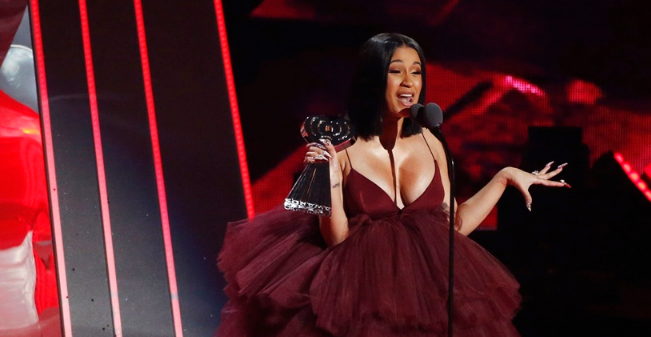 Ain't nobody gonna tell Cardi B what to think or do...not even President Donald Trump who was dragged by the rapper for his plan to build a wall on the Mexican border.

The Bodak Yellow star took to Instagram Live this week to blast Donnie's request for Congress to build the wall, telling him that he made promises to *f**king racist rednecks" and he needs to keep his promises now.

"You promised these f**king racist rednecks that you was gonna build the wall, but you knew that was impossible. But they voted for you and you promised them this sh*t so now you have to do it," she said.

Sis isn't convinced that the wall will do anything, adding that people will always find a way around it.

"Even if motherf**ker build the wall, that's still not going to f**king prevent people coming into this country. Trump is like a clout chaser. He's like one of these new rap artists — they follow, they do the most for clout. And Trump wants that," she added.

Cardi B later returned to the social media network to school her fans on the news and what was happening with the government shutdown in the US.

In a video she said the country was in a "hellhole right now, all for a f**king wall".

“This sh*t is really f**king serious, bro. This sh*t is crazy. Like, our country is in a hellhole right now, all for a f**king wall. And we really need to take this serious. I feel like we need to take some action.”

I know a lot of ya do r watch the news so I’m letting ya know shit getting real .....I ain’t going to say nothing much tho I don’t want mofos to off me.....ANYWAYS TWERK VIDEO OUT NOW

Cardi isn't the first big celeb to speak out on Trump but her fans went cray over the video the TL with their opinions.

I love this. Thank you @iamcardib for giving zero f*cks https://t.co/Nwn1ymayWE

Prepare for the inevitable Cardi B/Trump twitter feud because we are living in the stupidest possible time.

Cardi B is bad bitch who won't take no shit from the Orange Man. She gone and told Trump that the government shutdown is bad. How is she so brave in this political climate? SLAY QUEEN! #Cardi

McDonald Trump invited Cardi B to The White House for dinner. 😂 pic.twitter.com/9OSjXS3fZv

Cardi B looking at Trump. pic.twitter.com/1uZAonVNmw

Cardi B dropped more facts on her instagram just now than Trump ever has. People having fits over her language; we know you hate on her because she’s smarter and richer than you’ll ever be.

Waiting for Trump to respond to Cardi B pic.twitter.com/RkacTfOIVZ

For putting trump in his place ma pic.twitter.com/5ku19D3r37

Kanye insists on dragging that MAGA cap into 2019 & fans are totes over it!

Kanye's latest Twitter rant is about breaking boundaries with his magic hat..
TshisaLIVE
3 years ago

We don't know where he's gonna come only that he needs to feel his "roots".
TshisaLIVE
3 years ago