A teary Taraji P. Henson got her star on the Hollywood Walk of Fame 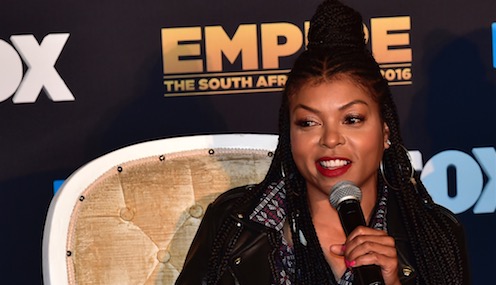 After years of hard work, 48-year-old actress Taraji P. Henson was finally honoured with a star on the Hollywood Walk of Fame on Monday.

Taraji dedicated her long-overdue star to her grandmother, mother and son. She said she knew that in addition to her hard work and perseverance, it was her gran and her mother's prayers that helped thus far.

Daily Mail Online reported that the actress had tears in her eyes as she expressed her gratitude.

"I know she never thought that she would live to see this," Taraji said when talking about her grandmother.

After she took some time to gather her thoughts and wipe her tears with tissues, she searched for her grandmother, Patsy in the crowd and told her a milestone such as the one she received was her legacy.

"And grandma I hope that you are so proud because this is your legacy."

The actress also came under social media fire just last week over comments she made that seemingly defended the controversial R Kelly when she indirectly implied that Harvey Weinstein wasn’t receiving the same smoke as the singer.

According to The Grapevine, Taraji attempted to clear things up during this past weekend’s junket.

“I actually was just making an observation, I never tried to say anything,” she insisted.

“People know what side I’m on. Why would I launch a foundation for mental health in an African American community for people to go talk to someone about traumatic experiences and then side with the predator? Does that make sense?”

Ayanda Borotho: Black people have a false sense of identity in the new SA

"No one is fighting the French to speak more English in France. It is at the core of our identity. If we wipe out our languages we will wipe out our ...
TshisaLIVE
2 years ago

The infamous painter had peeps talking both sides of the SA-Zim border.
TshisaLIVE
2 years ago

Malcolm X wants to give R3,000 to the malume who went viral eating nectarines with pap

The People's Blesser is also giving R2,000 to anyone who can find him.
TshisaLIVE
2 years ago

Kabomo says that stigmas around black South African men prevented him from reaching out.
TshisaLIVE
2 years ago
Next Article