WATCH | From Maroon 5 to Gladys Knight, here are 6 must-see moments from the Super Bowl 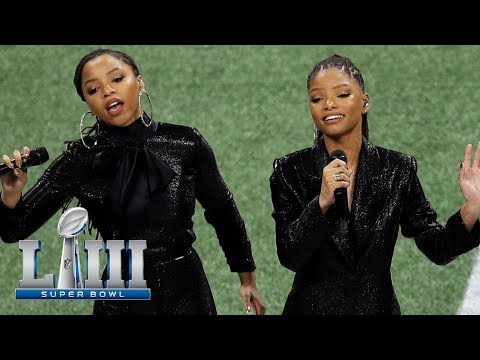 Chloe and Halley Bailey perform during the Superbowl.

The annual Super Bowl took place on Sunday, 3 February 2019 and, as is customary, it was more about the half-time show than the actual game between the New England Patriots and Los Angeles Rams (The Patriots won, by the way).

This year, however, many celebs opted out of participating in the half-time show as a show of support for football player Colin Kaepernick, who previously took to his knee during the national anthem in protest against racism. His decision was applauded by some, while others called him unpatriotic.

Here are some of the stand-out moments from the night.

HuffPost reported that Grammy winner Gladys Knight delivered a two minute-long rendition of the US anthem.

At the announcement of Knight's performance at the Super Bowl, she said she hoped to give the anthem its voice back and unite Americans.

“Empress of Soul” Glady’s Knight continues to battle major backlash ahead of her performance at the Super Bowl on February 3 2019.
Lifestyle
3 years ago

The Atlanta-born sisters, Chloe and Halley Bailey performed a rendition of America the Beautiful.

Joined on stage by Travis Scott and Big Boi, the band performed their hit songs from the 2004 album Songs about Jane, including She Will be Loved and Harder to Breathe.

Tom Brady, an American quarterback for the New England Patriots, thanked the crowds for their support after he won his sixth Super Bowl.

Apart from the performances and the actual game, Super Bowl commercials are always highly anticipated. Here are some of the favourites that dominated social media.

The all-time greatest, most competitive NFL players gathered for the #NFL100 gala. What could possibly go wrong? pic.twitter.com/pvE0fKuSye