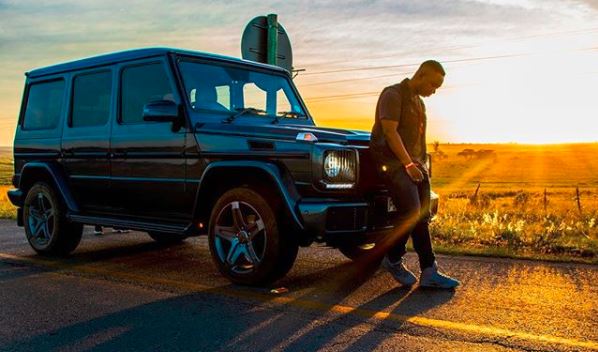 Fans have reacted with mixed emotions to DJ Shimza's plea for any leads that will help find his flashy Mercedes-AMG G63, which was allegedly stolen from his garage on Monday.

The fancy set of wheels retails for anything between R2,5-million and R3-million. While Shimza urged anyone who may have any information about the incident to get police, social media users blamed the DJ's "show off" nature for the ordeal.

Midrand police spokesperson sergeant Matome Tlamela confirmed to TshisaLIVE that a case of housebreaking and theft had been opened at the Midrand police station by the DJ's helper.

She explained that the case would have to be transferred to Olievenhoutbosch as the incident happened at Blue Valley Golf Estate.

"I can confirm that a case was opened on Monday night by the helper, so the helper is the complainant. They reported housebreaking and theft. The incident happened at Blue Valley so the case will have to be transferred to the Olievenhoutbosch branch because that is their jurisdiction."

Shimza asked fans to help him on social media but his brother, Pontsho told TshisaLIVE that no one had come forward with any leads yet.

"So far we haven't had any leads from social media. We've had people that think this is a joke and others that just haven't been helpful."

Shimza's personal assistant said the DJ was back in Mzansi after he cut his trip in Portugal short to attend to the matter at home.

My car has been stolen out of my garage from Blue Valley Golf Estates in Centurion, license plate FN 23 MB GP, please contact @sapoliceservice or call 0732568494 should you have any information that may lead to recovery of the car 🙏🏾 pic.twitter.com/WNjT5GSgkn

She may not be a health expert but the proof is in the pudding when it comes to Thembi Seete.
TshisaLIVE
2 years ago

A song titled Hit & Run was bound to ruffle some feathers, especially after the actual accident Skolopad was involved in last year
TshisaLIVE
2 years ago

Amanda Black on toxic relationships: Only you can save yourself

"If you are reading this and this is your story. You will find peace," Amanda told her fans on Twitter
TshisaLIVE
2 years ago

But Nina just punched AKA in the gut and we all felt it.
TshisaLIVE
2 years ago