Steve Hofmeyr on backlash over apartheid-era flag: SA's in denial of 'rot under the new flag' 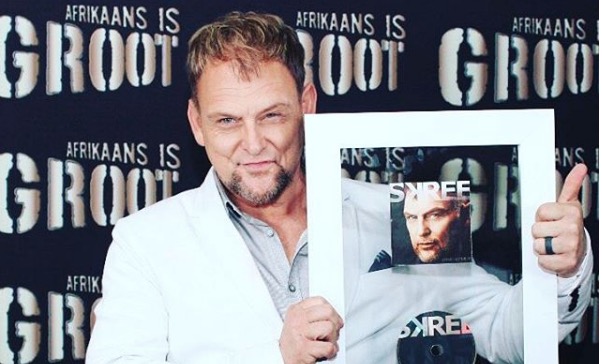 Controversial Afrikaans singer Steve Hofmeyr has once again been slammed and labelled "racist" after he shared pictures of himself with the old South African flag.

To add fuel to the fire Steve seemed impressed with himself and has dubbed the latest antic "freedom of expression".

The singer took the picture at an unidentified pub, which proudly displayed several old apartheid-era flags.

Steve told TshisaLIVE that the only thing wrong with the picture was that he was in a pub with no beer.

He said he knew how "Black Twitter" would react because they're "predictable".

"(It's the) same bigotry as always. This is South Africa's way of denying the rot under the new flag," Steve said in response to the "anger" on social media.

After offering to buy plane tickets and help Steve move to Australia or any other place for that matter, tweeps also told the Afrikaans singer that his "racist" acts and stunts were tired.

They called him out for seeking attention with the "wrong" things.

this act is tired, steve hofmeyr.

"Black Nazis?"Your choice of words are a clear reflection of your mind set. Dig your heels in all you want, the world is become smaller & smaller for racist white supremacists. You deliberately incite division & intolerance because it makes you feel relevant. It's sad & pathetic.

Dear @Spotify
Re: @steve_hofmeyr
Whatever differences we have a South Africans - as political parties, races, genders, we stand in unison in search of a SA that is NOTHING like Apartheid SA. Apartheid was to black SAfricans what Nazism is to Jews. It deserves similar contempt.

When everyone already knows you're an asshole you don't really have to keep on proving it... 🙄🙄🙄 #stevehofmeyr #weknowdude https://t.co/NIKEUsVl3d

No crime being committed there. This is just Steve being himself. And all his followers are just being themselves, lackadaisical!!! So, go on Steve and reminisce about the good old days. Some "De la Ray" nostalgia

None of the bachelors on DMF actually had a chance with Jessica.
TshisaLIVE
2 years ago

#OPW | We should stop hating on people’s happiness

It may not have been perfect for Twitter but it made the bride and groom happy.
TshisaLIVE
2 years ago

Empire actor Jussie Smollett was back on stage a few days after he was attacked in Chicago in what is believed to be a homophobic and racist incident.
TshisaLIVE
2 years ago