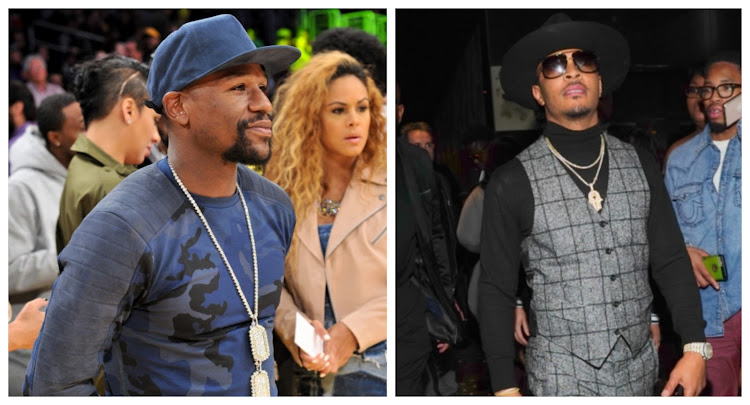 Floyd Mayweather and T.I have taken shots at each other on social media.
Image: Allen Berezovsky/Getty Images (Floyd) and Prince Williams/Wireimage (T.I)

The fire that was sparked by the Gucci 'blackface' sweater has ignited once again with calls for boycotts of the brand causing a feud between T.I and Floyd Mayweather.

Gucci was forced to issue an apology last week after it released a black wool balaclava, which has a slit near the mouth framed in red and was compared to the racist practice of light-skinned people painting their face to appear black.

Angry fans, backed by some celebs have vowed to boycott the brand, but were further outraged this week when boxer Floyd Mayweather went on a shopping spree at one of the brand's stores.

When asked why he hadn't joined the boycott, Floyd suggested that he wasn't a sheep who followed the crowd.

"See, the thing is this. I live for myself. I do what I want to do. I'm not a follower. You know when everybody else they say, 'Everybody gonna boycott?' I say, 'guess what? This boy gonna get on a yacht and live life," he told TMZ.

His comments angered rapper T.I who put it all in an explosive diss track aimed at the star.

Boy even put Mr Floyd on the cover dressed in the offending Gucci sweater.

“Damn, it must suck to be a f*ck n*gga, old greedy ass n*gga, only thinking about himself. He get the fame, he get the wealth. But people are struggling, who did you help?” T.I rapped on the track.

But T.I forgot that Floyd is also an honourable member of the petty party and dude took his first shot by posting a long letter slamming celebs who are fake woke and who join a new protest every week.

"These people are playing hopscotch. First, they're supposedly boycotting the NFL but as soon as the Super Bowl came around, they were either at the game, watching it on TV or throwing Super Bowl parties. Last week, it was R Kelly, this week it’s Gucci. People boycott for trend but turn around and still shop at H&M and watch the NFL," he wrote alongside the letter.

Floyd Mayweather on Instagram: “These people are playing hopscotch....

Loyiso Gola says joining the boycott would be useless.
TshisaLIVE
2 years ago

Katy Perry's ‘blackface’ shoes to be pulled from shelves after outcry

The design on the black shoes, which are part of the star's 2017 range, features protruding eyes, a nose and full red lips.
TshisaLIVE
2 years ago

Trevor is proposing that big brands pay black people for every racist 'mistake' they make...
TshisaLIVE
2 years ago

Someone please tell Moruti Gucci not to get this one by Small Street.
TshisaLIVE
2 years ago