WATCH | Dorothy Masuka rolled back the years in her last performances

The star was full of life as she took to the stage to pay tribute to Bra Hugh, and later at Ma Winnie's memorial 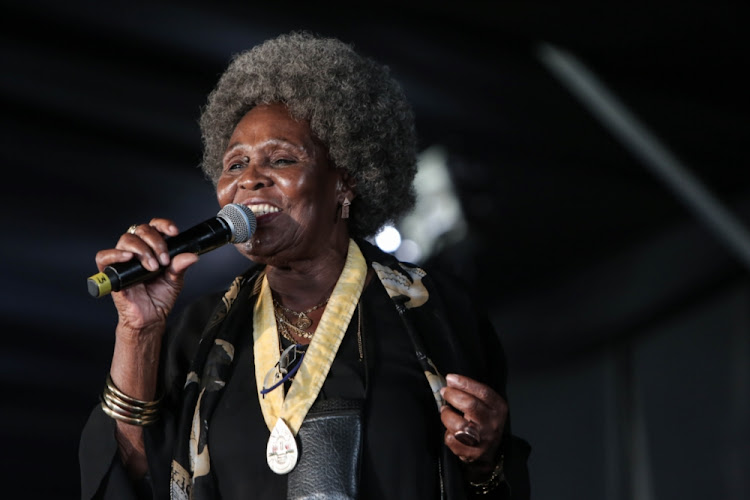 Just over a year before her death, veteran musician Dorothy Masuka took to the stage with crutches in hand, to perform at the memorial for her late friend Hugh Masekela.

At the time little did mourners know it would be one of the star's last public performances and that several months later they would be preparing to pay tribute her.

The veteran jazz singer died on Saturday at the age of 83. Her family said she spent her last moments at home, surrounded by those close to her.

Masuka had been suffering from complications related to hypertension after a mild stroke last year.

She walked into the Hugh Masekela memorial at the auditorium at UJ Soweto campus clearly in pain, but with a smile on her face.

The singer sat near the front and watched with excitement at legends of the music industry took to the stage to perform.

Eventually she decided that she was strong enough to join them and was accompanied to the stage where Caiphus Semenya was performing.

In one of her last public performances, Dorothy Masuka had the crowd on their feet at Bra Hugh Masekela's memorial pic.twitter.com/UV0BhSqtUh

Masuka grabbed a mic and, for a short while, performed like she was decades younger, free from any restrictions.

She electrified the audience, who were soon on their feet and joined her in dance.

After her performance, Ma Dorothy told TshisaLIVE that despite her ailments she felt energised and wanted to take to the stage to pay tribute to Bra Hugh.

Three months later, she would return to the stage for one last high-profile public appearance at the memorial of Winnie Madikizela- Mandela.

Dorothy Masuka's light will always shine, in death just as it did in life

Whether she was infusing happy, jazz vibes into her songs or singing sweet mellow love songs, Dorothy made timeless music that will her name alive
TshisaLIVE
3 years ago

Dorothy Masuka died at her Johannesburg home surrounded by family.
TshisaLIVE
3 years ago