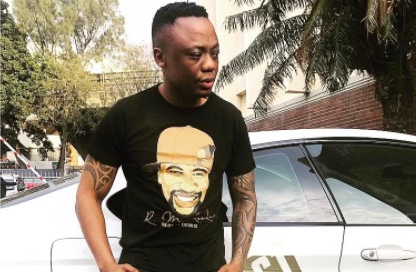 DJ Tira has issued a statement regarding the alleged abuse video that shows a man beating up Babes Wodumo.
Image: Instagram/ DJ Tira

DJ Tira has responded to the widespread backlash he's received after a video that seemingly shows a man believed to be Mampintsha physically assaulting Babes Wodumo went viral on Monday.

Tira topped the Twitter trends list as fans dragged him into the situation, as Mampintsha used to belong to Tira's record label.

In a statement issued on Twitter Tira condemned any form of women abuse and said Babes was at home "safe and sound".

"My heart is really sad for Babes Wodumo and no woman should have to go through this. For those of you who know me, you know that I have never, and would never, enable abuse," Tira wrote.

Even though Tira expressed how appalled he is by abusive men, he didn't mention Mampintsha by name in his statement.

"It is with great sadness that we wake up to yet another report of domestic violence when our country is already full of so much pain. It is also with great sadness [that] I have to deal with the backlash of this issue as a third party continuously being dragged by the South African republic," the statement began.

A recording of the video clip is believed to have been shared on Babes' Instagram Stories during the early hours of Monday morning.

Tira made it clear that he was against abuse in all its forms and urged men to love and respect women instead of hurting them. He also made it known that he had reached out to Babes, whom he said was okay at home.

"I have since reached out to Babes Wodumo who is at home, safe and sound," he said.

Tira didn't specify if the video was authentic or if there was any truth to it.

Read the statement in full below.

WARNING: GRAPHIC CONTENT: Babes Wodumo went live via Instagram video on the March 3 2019. She hid the camera while being hit several times, allegedly by her boyfriend, Mampintsha. In the video, Wodumo is seen holding her hands to her head during the incident.