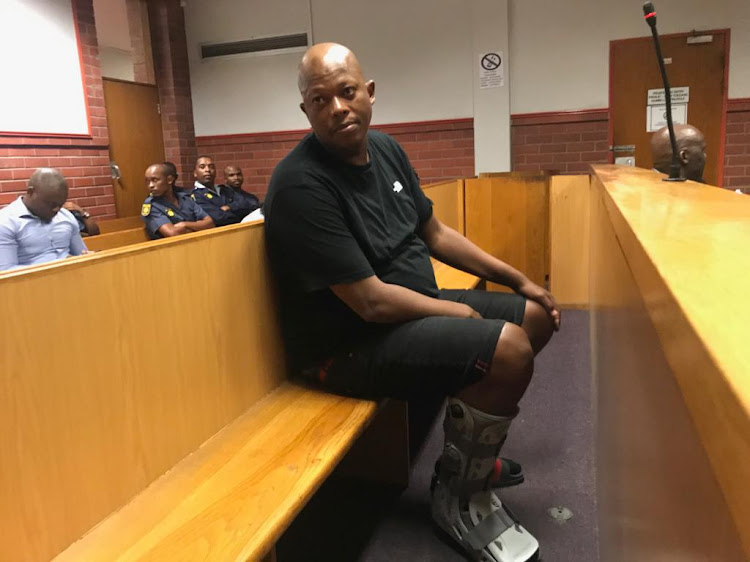 Mandla "Mampintsha" Maphumulo in the dock in the Pinetown Magistrates Court on Tuesday March 5 2019, where he was granted R2,000 bail.
Image: Thuli Dlamini

Maphumulo appeared in the Pinetown Magistrate's Court on Tuesday on charges relating to the alleged assault of his girlfriend, fellow musician Bongekile Simelane, better known as Babes Wodumo.

Maphumulo turned himself in earlier in the day after a video of a man - believed to be the long-time boyfriend - was recorded live on her Instagram page during the early hours of Monday morning. In the video, a man can be seen assaulting the singer several times.

During the brief appearance, Maphumulo was wearing a "moon boot", which is associated with a broken, fractured or otherwise injured leg. Before the court appearance, his lawyer confirmed that Maphumulo had laid a counter-charge of assault with police.

In an unopposed bail application, Maphumulo was ordered to have no contact directly or indirectly with Simelane.

The matter will be back in court on May 15.

Events in the Babes Wodumo assault case have taken an unexpected turn, as the alleged perpetrator has laid a counter-charge.
TshisaLIVE
3 years ago

The suspect in the Babes Wodumo assault case has been arrested and is currently in police custody.
TshisaLIVE
3 years ago

Musician Babes Wodumo is receiving treatment at home, her father revealed on Tuesday.
TshisaLIVE
3 years ago