Nicole Nyaba: I forgive SA for being hostile towards me 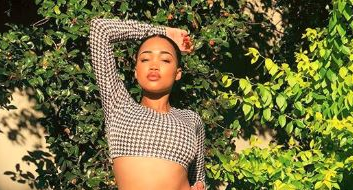 Nicole Nyaba has come out to declare that she has forgiven all the people that were hostile towards her and who "dragged her name in filth" from September 2017.

The video vixen, who has been sharing Bible scriptures on her Instagram of late, wrote long texts on her Insta stories this week expressing how she was freeing herself of all the bondage that comes with not forgiving people that wrong you.

"I forgive this land and its inhabitants for being hostile towards me in speech and in actions. I declare that I am free from the bondages."

Back in 2017, Nicole not only grabbed headlines for her sexy snaps and sultry moves as a video vixen, but also hogged headlines after it was rumoured she had cheated with AKA while he was still with Queen B.

Both AKA and Nicole have denied the claims.

Fast forward to 2019 and Nicole has decided to let all the hate and hurt that resulted from those "rumours" go.

"I remember the day South Africa started blaspheming my name and bullying me in September 2017 and you thought I forgot. God does not like ugly. I'm of royalty."

Taking to Instagram Live back in February, Nicole warned fans not to get duped by fake accounts saying "dumb" things using her name.

"All that other kak is to confuse you all. I'm not one to make stupid, dumb and uneducated statements and f**k you," she said. This just a few days after she had taken to social media to say that people intentionally disregarded her intelligence.

"I'm way too intellectual and gifted to be running such hogwash. I'm one of the great minds but people will never know because they are too focused on my flaws and not on my knowledge."

Since breaking into the industry, Nicole has tried, on multiple occasions, to let people know that she is more than just a video vixen or a club hostess.

One-hit wonders for who? Distruction Boyz to take Omunye to London

Tiisetso Thoka: A metrosexual man is no less of a man!

Lasizwe sets the record straight on new copycat claims: I gave her credit!

Social media influencer and vlogger Lasizwe has come out to dismiss claims that he's copied yet another concept for one of his latest videos.
TshisaLIVE
2 years ago