Can someone give Ed Sheeran SA citizenship already? He loves Mzansi

The dude is totes stanning over our beautiful country 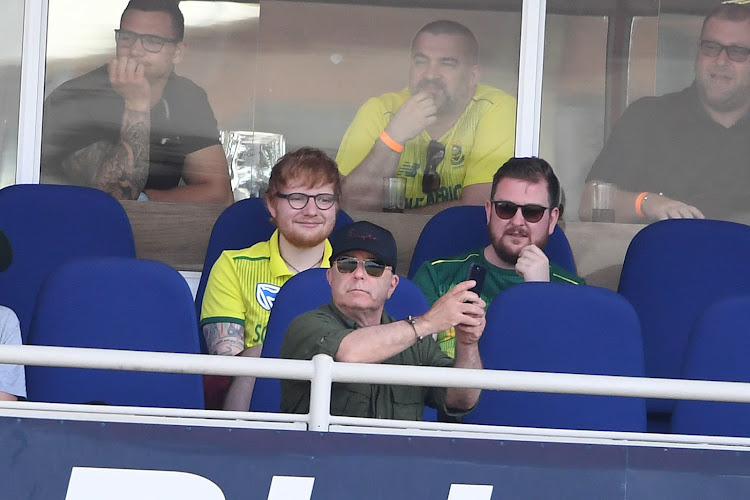 Global superstar Ed Sheeran had Mzansi fans eating out of the palm of his hands - not just with his rocking performances this weekend, but also for his evident love for our country.

Ed performed at the FNB Stadium on Saturday and Sunday night before he heads to Cape Town as part of his Divide album tour, and wanted to immerse himself in the country.

So while other bands scream our cities' names or bring a flag on stage, Ed was there on Saturday night performing in a Springbok jersey.

Amazing experiencing @edsheeran live, topped it off by him wearing our beloved @Springboks jersey! Thanks @OfficialSMSA for the hospitality. pic.twitter.com/dm0hkpCarT

The crowd couldn't get enough of his skipper and screamed when they saw him on stage with it.

On Sunday it became clear that ol' Ed is actually a massive SA sports fan period, when he popped in at the cricket to see the Proteas beat Sri Lanka.

Of course, this is not the first time that Ed has shown his SA colours. Several years ago he tweeted that he was at a SA house party and threw some local lingo in for control.

"I'm at a house party with a load of South Africans and it's 'p*es kiff' Yaah brah!" he once wrote in a tweet.

Ed performed in Joburg on Sunday night as Bafana Bafana was taking on Libya so we're not sure if he was cheering for Tau and the boys from backstage. But he did slip on his Proteas shirt for his encore.

But those who went to his shows at FNB Stadium in Joburg this weekend were grateful not only for Ed's attire and love for Mzansi, but also the added security.

There were initial security fears in the run up to the shows after the Global Citizen Festival at the same venue in December 2018 was marred by muggings outside the stadium with no police in sight.

As we embark on the 2nd day of the #EdSheeran Concert at the #FNBStadium #JMPD has deployed 114 Officers, 53 Traffic Wardens 47 Patrol vehicles & 8 Horses to manage & control traffic in & around the #FNBPrecinct

We continue to ensure that all those attending the Event are safe pic.twitter.com/6lYErWKsAh

Taking to social media  people remarked about how tight the security was .

Last night was absolutely amazing ❤️!
Not only were the artists an absolute treat and outstanding, but the event was really well organized and safe.
Thank you @BigConcerts for this amazing opportunity!🙏@edsheeran @passengermusic @shekhinahd, you guys were absolutely amazing ❤️ pic.twitter.com/Ur6lC23mHn

For me, to take a Sunday evening drive to the #FNBStadium for the #EdSheeranConcert hosted by @BigConcerts to watch @edsheeran, @passengermusic under the protection of the SAPS, JMPD & other security companies is safe for any black body present there?

@BigConcerts @edsheeran #dividetourSA #dividetourjhb @gozeelo_sa @AsktheChiefJMPD what an awesome concert tonight, very efficient getting in and out, felt very safe at all times, brilliant 1st concert for my 2 girls to attend, well to all involved.

Very well done to @BigConcerts @Uber_RSA @TheGautrain. @edsheeran’s concert was organized so incredibly well. I was very impressed. I must say.

A lesson was definitely learnt from Gobal Citizen!

Concertgoers at the first of two Ed Sheeran concerts held at the FNB Stadium in Johannesburg on Saturday expressed delight at how well the event was ...
News
2 years ago