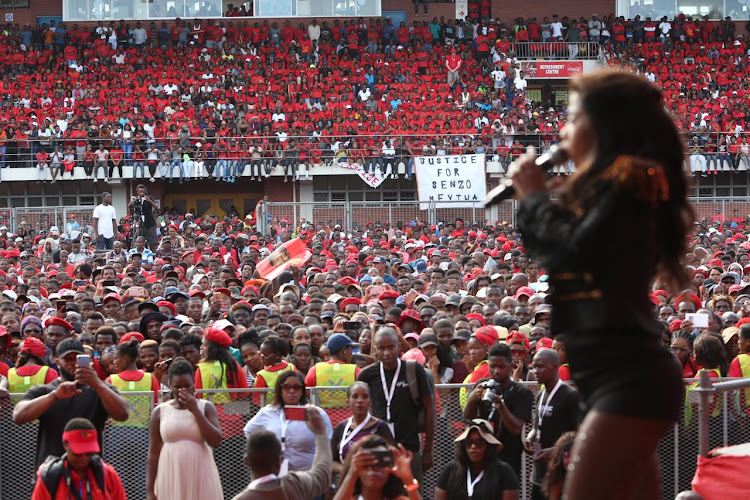 Kelly Khumalo performs at an EFF rally in Durban on Sunday as a banner reading "Justice for Senzo Meyiwa" is displayed.
Image: Jackie Clausen

Kelly Khumalo walked off stage after performing only two songs at an EFF rally in Durban at the weekend, after thousands of people chanted "Senzo" and displayed a banner calling for justice for the murder of the late goalkeeper.

Kelly, who was in a relationship with the Bafana Bafana star at the time of his death in October 2014, was performing at the Chatsworth Stadium when the chants rang out.

According to Sowetan the chants grew louder from the back of the stadium after Kelly performed her first song. She then signaled to the DJ that she would only perform one more song.

Kelly Khumalo performs at an EFF Rally in Chatsworth . She performed only two songs as the she was received by a crowd holding a banner “ justice for Senzo Meyiwa” @TimesLIVE #EFFKZNRALLY #KellyKhumalo pic.twitter.com/YZmkV2bE7I

As she performed a banner could be seen on the stands, reading: "Justice for Senzo Meyiwa".

She stared stone-faced as she walked off stage and into a waiting car.

Kelly Khumalo performs at an EFF rally in Chatsworth. She only performed two songs as some people in the crowd chanted Senzo’s name and hung a banner saying justice for Senzo @TimesLIVE #EFFKZNRALLY #KellyKhumalo pic.twitter.com/b0TkIKIPkk

TshisaLIVE's attempts to contact Kelly and her management for comment on the incident were unsuccessful by the time of publishing this story and will be updated once a response is received.

The incident comes just over a week after Kelly told eNCA that she was angry that  police had not found the person responsible for Senzo's death.

"I don't know why police have not found the perpetrators. There were fingerprints. A hat (belonging to one of the armed men) was found. There were witnesses."

Kelly says police have all the information to make arrests.
TshisaLIVE
3 years ago

Hundreds of EFF supporters continued to pour into the Chatsworth Stadium, south of Durban, on Sunday afternoon, where thousands more had already ...
Politics
3 years ago

Lay off Kelly Khumalo. It is the police's job to find out who killed Senzo Meyiwa.
TshisaLIVE
3 years ago

‘Rasta’ Senzo Meyiwa painting has the internet in a huff