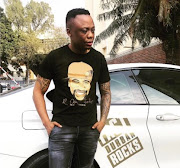 DJ Tira has come under fire on social media after he posted a video of himself jamming to Mampintsha's new track.

The track purportedly features the words Mampintsha was heard shouting in viral video footage of him allegedly slapping Babes Wodumo earlier this month.

DJ Tira topped the trends list over the weekend after he shared a short clip of himself, his wife, Gugu Khathi, and an unknown girl hyping up and promoting Mampintsha's new song.

In the alleged "abuse" video, Mampintsha could be heard saying: "Kuney'ngane layindlini" [There are kids in this house]. That exact same line can be heard on the video Tira shared.

Shortly after the video of Mampintsha allegedly slapping Babes several times went viral, Tira issued a media statement, distancing himself from the situation.

In an interview with Drum magazine, Tira also said Mampintsha should face the consequences of his actions.

"Mampintsha is a close friend, but what he did wasn't right, and he needs to get whatever punishment is due to him," Tira said at the time.

Attempts by TshisaLIVE to get comments from DJ Tira or Afrotainment and Mampintsha (through his lawyer Pat Magwaza) on the song and Tira's apparent support of it were unsuccessful at the time of publishing.

Check out the videos of DJ Tira jamming to the track below.

Also I just wanna say that I'm so disgusted at DJ Tira the audacity of him to proudly promote Mampintsha's new single as if nobody knows what he did to Babes Wodumo on record.

Twitter users also expressed their outrage through comments and memes.

DJ tira is still supporting and promoting Mampintsha's music even after what he did to Babes https://t.co/eBJjXwUIPF

Mampintsha is not sorry. He beat her up and now released a song inspired by their exchange that day. Those ladies in the car with Dj Tira balihlazo.

A whole DJ Tira who was up in arms supporting women who go through abuse is singing a different tune now, he's supporting his long time friend Mampintsha pic.twitter.com/eMFIAFzTdi

I asked that question when I saw mampintsha being celebrated for his new song quoting lyrics from beating up video- why do you shy away from that?

Your outrage on DJ Tira means nothing if you’re: (1) still following him, (2) streaming his music, (3) attending shows where he is performing, (4) supporting Afrotainment pic.twitter.com/yZRJrYzNpI

We need to cancel DJ Tira as well

Maybe DJ Tira needs to be reminded about the statement he issued after the assault of Babes Wodumo. He is shameless. https://t.co/w0x1czLIhy

Lets not pretend to be surprised here guys. One of DJ Tira's dancers allegedly RAPED A 13 YEAR OLD CHILD and he is still being ALLOWED to dance in Afrotainment. If he is supporting an alleged pedophile rapist then nothing will stop him from supporting Mampintsha. #Mampintsha https://t.co/cRqJNv3qSA