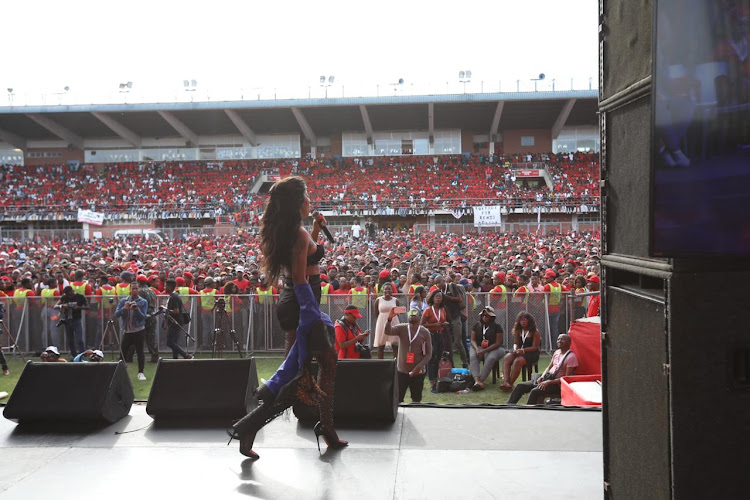 Kelly Khumalo performs at an EFF rally in Durban on Sunday as a banner reading "Justice for Senzo Meyiwa" is displayed.
Image: Jackie Clausen

Social media users have come out in support of musician Kelly Khumalo after she left an EFF rally amidst chants of  "Senzo" and a banner calling for justice for the murder of late Bafana Bafana goalkeeper Senzo Meyiwa.

Kelly, who was in a relationship with the soccer star at the time of his death in October 2014, was performing at the Chatsworth stadium when the audience started the chants.

According to Sowetan, when the chants rang out Kelly signalled to the DJ that she would only perform one more song and then walked off stage.

She was seen looking stone-faced as she exited the venue in a white SUV.

Kelly had spoken earlier this month of her frustration with police who have until now failed to find Senzo's killers, and social media was soon filled with messages in support of Kelly.

Some criticised the crowd at the rally for being insensitiveamd, while others put the blame squarely on the police.

Police must do justice for Kelly khumalo we tired NOW!...😤 pic.twitter.com/NpHKtaE3aF

There's honestly nothing that justifies the hate directed at Kelly Khumalo. Some don't even care about Senzo, they just like trolling.

Kelly may have been in the same house where Senzo Meyiwa died,

but she didn't kill Senzo Meyiwa,

they were both VICTIMS.

As she performed a banner could be seen on the stands, reading: "Justice for Senzo Meyiwa".
TshisaLIVE
2 years ago

Kelly Khumalo is in love with a mystery guy: 'We're taking it slow'

Kelly says she is taking her new relationship slow.
TshisaLIVE
2 years ago