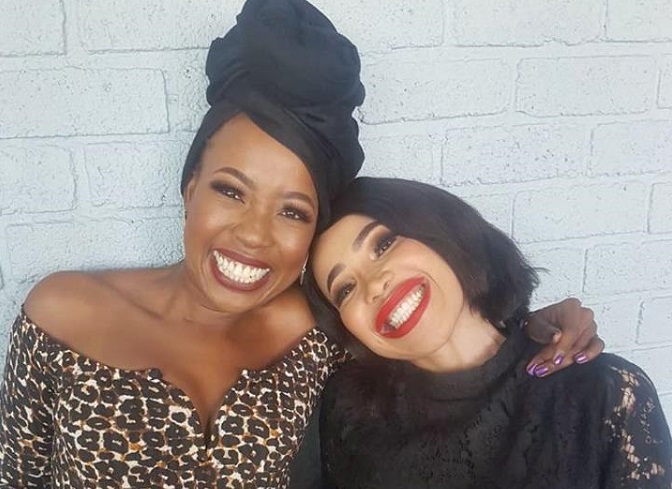 Ntsiki Mazwai and Mshoza are friends once more after a 9 year long beef.
Image: Supplied

Fans of Ntsiki Mazwai and Mshoza were pleasantly surprised recently when snaps of them embracing each other emerged after a long-standing their feud over skin complexion and weaves was officially squashed.

The pair, whose "feud" started as a twar after Mshoza felt personally attacked when Ntsiki expressed her strong dislike for wigs and slammed people that bleach their skin, recently met at the Moja Love studios and buried the hatchet.

"We just bumped into each other on set. And our spirits just filled the room. It was natural honest love and sisterhood that connected us. She even told me that I am her icon. She expressed her love for me. Nothing but love prompted us to be reunited. I want people to know that we are two different species and the contribution we bring into the industry adds value," Mshoza said.

Mshoza added that in retrospect she realised that weaves and skin were not enough reason to separate her and Ntsiki. She said she considered Ntsiki a powerhouse and found no joy in "feuding" with her or any other woman in the industry.

Plus, she wanted bygones to be bygones because as it stands she couldn't even remember why she was so mad at Ntsiki in the first place.

"It was a long Twitter catfight... like nine years full. At the time I felt I was attacked about my so-called skin and wig addiction. I love myself and my skin and hair, but I always make sure I rock a wig. You know, to look and feel good. I know I am an African before all that but I enjoy beauty and pampering myself. A lot was said then, what she said made it seem like we are not sisters. I'll admit, I took things personally. But, I don't even remember the rest."

Mshoza teased that even Miriam Makeba had "afro wigs for days but no one fought against her" so she didn't see what the big deal was.

However, she's totes over it now and nothing made her happier that reuniting with her industry sister.

"I am in space in my life were I tirelessly working on uniting every Industry women. My goal still the same to fill up a stadium with the most powerful women in African music. The day will come and abafazi (women in the) industry will be leading the pack. Watch this space."

Maybe it's the chicken we have... that's sisterhood love we have. It makes them wonder. ❤❤❤ https://t.co/ZggPJku1hD

Mampintsha who is facing assault allegations has started an organisation to help men talk about their issues.
TshisaLIVE
2 years ago

Fans were in their feels over Yolanda's big secret, until she said a sangoma healed her HIV
TshisaLIVE
2 years ago

Fans came for Cassper when he showed them just how much of a Nicki Minaj stan he is.
TshisaLIVE
2 years ago