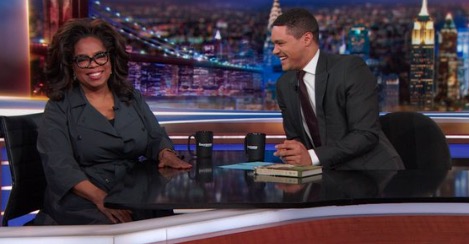 Oprah Winfrey spoke to Trevor Noah this week about her new book - as well as some other topics.
Image: Twitter/The Daily Show

Oprah is doing a number of press interviews about the release of her new book, The Path Made Clear, as well as her new mental-health project with Prince Harry.

The Hollywood Reporter wrote that Oprah - who recently received criticism for interviewing the two people who made molestation claims against late US pop star Michael Jackson in Leaving Neverland - told Trevor that it was important for her to understand what had happened.

Apparently Oprah stayed for the between-the-scenes segment, where she discussed "normal people" things and took questions from the audience.

My first time doing @thedailyshow and I walked into this surprise from @trevornoah! Tune in tonight at 11 PM.

Some of the topics included travelling with her own bread and avocados, never sending her underwear to be cleaned and running out of toilet paper.

Clearly sharing a bond with Trevor, Oprah posted videos of herself before the show. In one clip, Oprah goes to Trevor while he's in make-up.

A little powder, a little conversation, and a lot of @trevornoah! See y’all later tonight on @thedailyshow.

WATCH | Trevor Noah spent the night as Jay-Z's bodyguard & it was hilarious!

This is the most hilarious thing you'll hear today!
TshisaLIVE
3 years ago