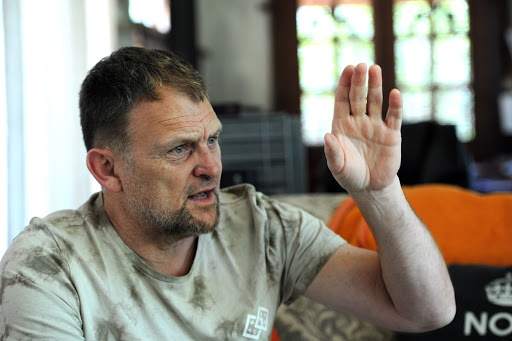 Multichoice has said that it will not be airing Steve Hofmeyr's content on its platforms.
Image: Gallo Images/Netwerk24/Felix Dlangamandla

Social media was fiercely divided on Tuesday after MultiChoice reaffirmed its stance against Steve Hofmeyr and confirmed that it will stop airing content from the controversial Afrikaans singer.

Multichoice confirmed to TshisaLIVE that it had made a decision to not air any of Steve's content, which includes archived material from the star, and distance itself from the controversial artist.

This after a tweet from the musician in 2014 resurfaced on social media where he claimed black people were the "architects of apartheid".

The company added that it had no further comment on the matter beyond a statement it had made when requesting, as sponsor of the event, that the Ghoema Afrikaans Music Awards remove Steve from its nominations list.

At the time, MultiChoice group executive of corporate affairs Joe Heshu confirmed to TshisaLIVE that it had requested that Steve "not form part of the event" and reaffirmed its commitment to standing against racism.

"MultiChoice is committed to the building of a non-racial society and strongly condemns any acts of discrimination. MultiChoice is proud of its support for Afrikaans, not only our investment in content for our DStv platforms, but also our sponsorship of festivals, events and the broader Afrikaans performing arts sector. Our commitment to Afrikaans and all local languages will not change... We welcome a society where freedom of speech is celebrated, however we take a stand against racism."

Meanwhile, social media was flooded with reaction to the news.

While some applauded the decision, many slammed MultiChoice for "censoring" the musician.

...I do not agree Steve Hofmeyr's philosophy but I believe in free speech. @MultiChoice's decision to censor him is flawed. Multichoice should be a platform for "free speech", not political correctness.

Thank you Multichoice, we will no longer see anything of @steve_hofmeyr on TV anymore.

Anyone that knows me knows that I am not a Steve Hofmeyr fan but DSTV is taking it too far. My question is will DSTV apply the same logic to someone like Julius Malema et all that literally sings about the killing of an ethnicity? These double standards need to stop... NOW.

You are very right, he has freedom of speech, but you have a right to who you will let in your house. No one has taken away his freedom to speak, their just saying, not in my house

Steve Hofmeyr is a racist, so there is no "Free Speech" about that. This has nothing to do with politics. https://t.co/iruZoFa6qe

Multichoice will no longer broadcast content with Steve Hofmeyr in it.

Will his fans boycott DStv and miss out on the rugby? pic.twitter.com/hxeKypoQzE

He worked hard to earn the "I am a racist t-shirt" now he's refusing to wear it. The only reason for that is it's affecting his pocket.

Charlize sparked debate recently when she revealed that her seven-year-old, whom fans assumed was a boy, identifies as a girl.
TshisaLIVE
2 years ago

Afrikaner vs Afrikaner amid fallout from Steve Hofmeyr boycott