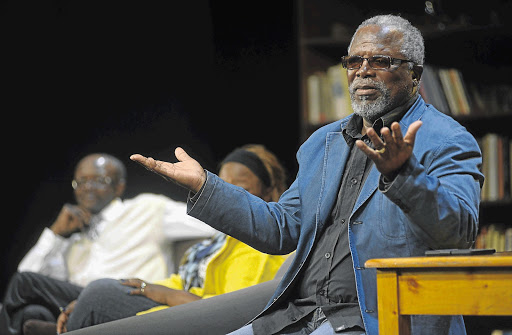 While it often takes a while for well-deserving artists to receive the recognition they deserve, the prestigious Naledi Theatre Awards saw fit to give due credit to thespian John Kani on Monday night.

John, who has a long, impressive resumé and accolades, was honoured with the World Impact Award at the Joburg Theatre, where the annual awards ceremony took place.

The Black Panther actor took to Twitter to express his gratitude.

"Thank you to the Naledi Awards and the theatre community for honoring me with the World Impact Award last night at the Joburg Theatre. Truly appreciated," he wrote.

Thank you to the Naledi Awards and the theatre community for honoring me with the World Impact Award last night at the Joburg Theatre. Truly appreciateed🌟🌟🌟🌟🌟

The awards, which are the biggest in the South African theatre industry, are now in their 15th year and are chaired by actress Kgomotso Christopher.

A video was aired detailing some of the huge projects John has created and starred in, including Black Panther, Lion King, King Kunene and many others.

"John Kani is renowned for his genuine personality and down to earth demeanor. He lives with his wife Mandy and son Atandwa. The Naledi Theatre Awards is honoured to present the 2019 World Impact Award to Dr John Kani," it said.

The video, which can be viewed below, explains why Kani is more than worthy of this recognition.

John Kani is honored with #TheNaledis19 World Impact Award this year. Congratulations to tatu Kani for this long and well deserved accolade that recognizes the works of the legend on stage, television and films. #recognition #celebratinglegends

Here are some snaps of celebrities who walked the carpet.

Oh what a night! Thank you to my hubby @whatdavidsaw for the amazing support tonight #nalediawards2019 @thenaledis Dressed by: @nikacouture

Something about how she said 'be a good father' just left tweeps howling!
TshisaLIVE
3 years ago

Sis has flu but fans thought she had the vutha virus.
TshisaLIVE
3 years ago

More and more celebrities are creating Instagram accounts for their children, some of whom are already brand ambassadors and influencers.
TshisaLIVE
3 years ago

Just when you thought you'd heard it all...
TshisaLIVE
3 years ago