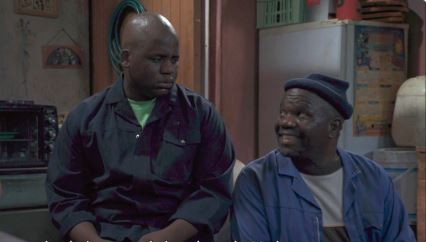 Skeem Saam fans are scared that if Leshole and Big Boy don't have 'the talk', he'll end up in trouble.
Image: Via Twitter

While the initial reaction to the prospect that Leshole could be having sex soon excited Skeem Saam viewers, the issue is becoming a stress factor for them because it's dragging and they know when Leshole is involved that usually means something bad will happen.

Already, his problems seems to be multiplying. Firstly he is still a virgin, who has no actual clue how things are done.

But his father will talk to him about anything on earth, except sex.

"Look, I'm not like the parents of the kids at your school who talk to their kids about sex. I won't talk to you about that. We can talk about football, school, fixing cars and things. Don't copy everything your white friends at school do," Big Boy said, much to the disappointment of tweeps.

Leshole is obviously too shy to get proper knowledge anywhere else and unless his girlfriend knows better he's most like to skip the basics.

Having been the poster boy for bad luck, viewers were already concerned for his wellbeing because they figure he'll probably get the girl pregnant or contract some disease. Or it may go well the first time, then he'll get addicted and distracted from completing his pilot studies.

Leshole's fan club can't even rejoice in peace over the fact that the guy finally has a girlfriend because by the looks of things it may come back to bite him on the butt.

So leshole is getting lectured on something he has never done before? Cool. #skeemsaam pic.twitter.com/2FAWURU61I

OPINION | All of a sudden Jub Jub is a fave? Mxm, y'all play too much!

How is it that we want to boycott abusers, women bashers, rapists but a convicted murderer is just fine?
TshisaLIVE
3 years ago