Aowa! It's been going on for too long now... 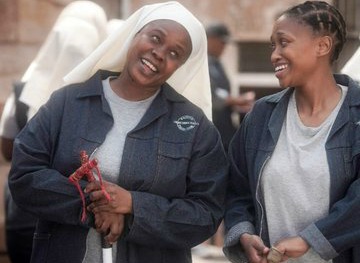 There's no denying that Nthati Moshesh has totally rocked her role as Masabatha but she's done such a good job that fans don't want her character at the helm anymore.

Viewers of the popular drama Lockdown couldn't hide just how much Masabatha's devilish tricks scare them. The cult leader has been controlling the Thabazimbi prisoners and fans are still finding it hard to understand how she manages to make people bend to her will.

Monday night's episode saw Mazet join the lost congregation and fans were left shook because they expected her to be immune to Masabatha's snake eyes hypnosis.

Now others are convinced Masabatha's powers will infiltrate reality and visit their homes but the drama is too good for them to abandon it. Finding themselves at a crossroad, all fans could do was ask the scriptwriters to make a plan to end Masabatha's evil reign.

They had the memes.

But how does Masabata fool them all even after they've noticed she's evil ? #LockdownMzansi pic.twitter.com/F5tOJkhcdP

#Lockdownmzansi I think when the bible warned us about wolves in sheep's clothing Masabatha is quite that description. Lord I SEE what you meant pic.twitter.com/9oGp1nxCPu

What are the visiting hours at prison I want to pay Masabatha a visit just to make sure if she's blind #LockdownMzansi pic.twitter.com/5BuT8VCZVq

At this rate even the cameraman is not safe #Lockdownmzansi pic.twitter.com/Rjle5W2z7k

We need an AA group to recover from the trauma of tonight's episode #Lockdownmzansi pic.twitter.com/ApTJyaNMUz

American fans of the Supa Mega felt like their hero had stood them up.
TshisaLIVE
3 years ago

'The song does not promote jolling - but if you do, make sure you are not caught!' says Tshwane-based musician Mxolisi Tshabalala about his new track ...
TshisaLIVE
3 years ago

Katlego says women need to learn how to deal with misogyny.
TshisaLIVE
3 years ago

"It's easy for them to judge looking from the outside. However, they don't know the real (story) or what is really happening," the young rapper said.
TshisaLIVE
3 years ago