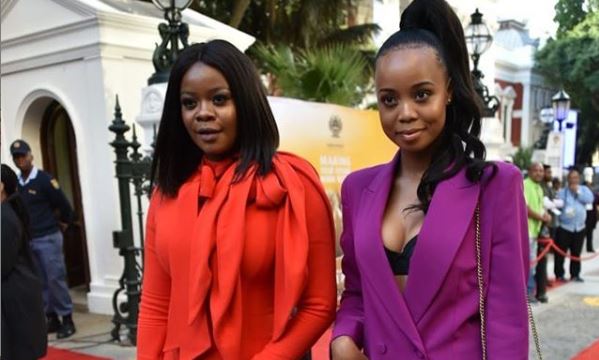 Parliament became a fashion fest on Thursday evening when some of the country's most important politicians donned their best outfits for the state of the nation address (Sona), but these celebs stole the show.

Ntando Duma, Robert Marawa, Bridget Masinga, Benny Mayengani and Babalwa Mneno were among the guests who attended the important speech.

Before President Cyril Ramaphosa made big promises, put out fires and shared his dream of a big city to rival Joburg, our celebs were heating up the red carpet at SA's answer to the Met Gala.

Here's what they wore:

The actress stood out in a simple purple suit combo that was businesslike, but also a little fun.

Matched the carpet in a red number by David Tlale.

The "president", as he is known to his supporters, looked more like a sultan in his white and silver coat with black scarf.

Babz brought "the sunshine" in a yellow dress that showed some skin.

Bra Rob kept it classy in a checkered suit and striped tie combo.

The ever elegant yet humble @robertmarawa and his invincible army of scorpions are here too #SONA2019 pic.twitter.com/hUqcSRnmqW

President Cyril Ramaphosa will present his state of the nation address (Sona) on June 19 2019 and Mzansi is divided.
Politics
3 years ago

Another Sona? Here's what you need to know

Everything you need to know about the second State of the Nation address (Sona) of 2019.
Politics
3 years ago

Young people have shared with President Cyril Ramaphosa some of the challenges they currently face living in South Africa, ahead of his State of the ...
News
3 years ago