Here's why Khanyi topped the trends list for most of Thursday... 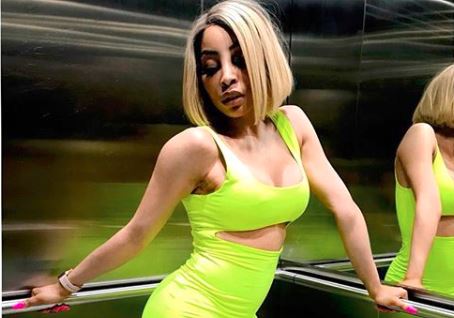 Khanyi Mbau's complexion was once again the butt of jokes on social media.
Image: Instagram/Khanyi Mbau

Khanyi Mbau dished out major spice after she was again trolled for her "ever-changing" complexion.

While Mzansi debated claims that lighter-skinned women got more privileges, Khanyi was dragged for her complexion after posting a picture of herself with her Porsche on Twitter.

Khanyi, who has opened up before about using skin-lightening products, was dragged hard, with some even photoshopping the image to make her appear darker.

The star responded to critics by telling them that they could not control her or tell her what to do.

She added that people's opinions of her didn't change anything.

I should co,e up with anti depressants next , I see a gap in the market! #Mother

Remember that I am not a nanny , I am not here to raise your kids.. find a better role model for them.
.
Secondly I am not a therapist to help you cope in being black or African
.
Lastly I am a celebrity you have a choice 2love me or hate me ( although I prefer us being cool)

Now, type in Khanyi Mbau on google search.. go far back as 2005 and see how ur opinions mean nothing to me from when I dated ur fathers, and taught you Botox and that men must buy woman cars etc YALL BEEN TALKING. Things ur idols are doing a decade later

In closing I AM STILL THE KHANYI YOU LOVE TO HATE! I am still going 2 give u reasons 2 have constipation. I will rock this boat till the seas dry up. AND YOU WILL BE THERE TO SUPPORT AND WITNESS IT! Y’all forget that we r in this together! U gave me this fame! Write it down MBAU

The streets were filled with reaction to Khanyi's  clapbacks, dividing Twitter into several camps.

Here's what tweeps had to say:

"I'm still going to give u reasons 2 have constipation."💀 pic.twitter.com/B6btnWuGKQ

I'm more worried about the the next 10-20 years though, will the skin still be holding up?! pic.twitter.com/eIESgZDHCe

we unfortunately can't find you in 2005. pic.twitter.com/JNuOyocQJl

We love you Khanyi stop with this imaginary haters pic.twitter.com/MF0yp8Jz78

"It's not contagious, it's not painful," said the actor in a post marking World Vitiligo Day on Tuesday June 25.
TshisaLIVE
2 years ago

Minnie joins the world of cosmetics.
TshisaLIVE
2 years ago