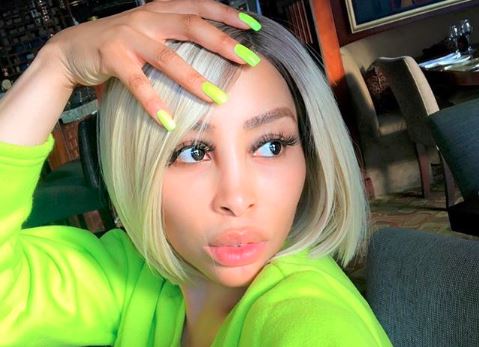 Actress Khanyi Mbau talks colourism in the entertainment industry and how she feels about people's criticism of her.
Image: Instagram/Mbau Reloaded

Actress and TV personality Khanyi Mbau has weighed in on Pearl Thusi's colourism tweets after getting into a heated war of words with Bonnie Mbuli.

Bonnie suggested that Pearl was complaining about not getting acting roles because she wasn't dark enough.

"So when a light-skinned actress complains about the one or two roles they didn’t get because they weren’t dark enough, I’m like but the part your crying about was being the slave who gets raped and beat up in the thing, people who look like you have never had to be in that position to begin with," Bonnie wrote.

In her defence, Khanyi said Pearl couldn't articulate what she was trying to say, adding that she was attempting to express that she was tired of being typecast based on skin colour.

"She wants serious roles where people can take her seriously and get into movies where she can get a meaty role," she said.

In an interview on eNCA, Khanyi admitted she was not oblivious to the fact that light-skinned people were more "privileged" than their darker-skinned counterparts.

"If you are dark skinned, you need to work harder to make yourself stand out and unfortunately that is the business," she said.

Pearl and Bonnie's debate on colourism got real personal.
TshisaLIVE
2 years ago

Khanyi also opened up about colourism in the entertainment industry and how she felt about people's criticism of her.

No stranger to controversy and backlashes, Khanyi has been vocal about changing her complexion, which she does through skin-lightening  and other procedures.

Recently, she told critics where to get off, saying  they could not control her or tell her what to do. She added that people's opinions of her didn't change anything.

Khanyi admitted that 90% of her skin colour was cosmetic. However, she said it was a personal choice and not something that was needed for the industry.

She said she realised that once her skin was fairer, she was able to use less makeup.

" Unlike sitting in a chair before I shoot a movie for long, I could just put on powder and I can go," she said.

On people who suggested she had an issue with being darker, Khanyi said Africans had become bullies about what being African is.

She insisted that being African wasn't about being dark and wearing beads, and that she wasn't bothered at all by what people said about her.

"It's actually interesting how South Africans fear what they don't know. When people don't understand, they just hear the word 'bleach' ... they think you are going to die," she said.

The musician slammed a director's decision to substitute a dark-skinned girl with a lighter-skinned one.
TshisaLIVE
2 years ago