Scoop Makhathini has called out Emtee for "naivety" over the way he joined Ambitiouz Entertainment and how he didn't bother to ask for advice, in the light of his recent woes.

Speaking with a panel that consists of Vigi, Miss Cosmo and DJ Speedsta on POPcast, Scoop Makhathini ignited a discussion around rapper Emtee and his current situation with his record label, Ambitiouz Entertainment.

When PH tried to suggest that perhaps the people in the hip-hop industry could have done "better" to help Emtee, Scoop flat out said no.

"Were we there when he signed his contract?" Scoop asked.

Scoop reasoned that the game couldn't be held responsible for Emtee's problems because the rapper never consulted anybody before he signed with the label.

"I have reached out to these dudes personally and on the phone. I have talked to them. Even now while Emtee is going through this, I called him and told him my nig** kanje,  kanje, kanje..." he said.

Scoop explained that signing a contract blindly was the worst thing an artist could do, especially when the same mistake has been made by other artists, that should have taught them to do better.

He added that perhaps it was also karma coming back for Emtee, for how he treated people when he was on top, especially A-Reece, who was part of the initial group of artists to leave the stable.

Emtee recently opened up about his financial woes, which have left him without a home or car. He told TshisaLIVE at the time that he planned to leave the stable soon but he wanted to do so as amicably as he could.

The star also revealed that his wife and kids have moved in with his in-laws while he tries to find a new place for them, and to negotiate an exit from his record label Ambitiouz Entertainment.

Watch the rest of Scoop and company's comments on the situation below: 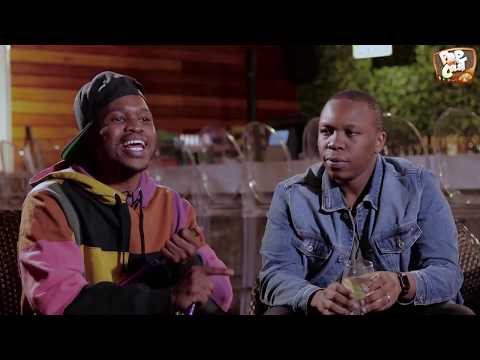