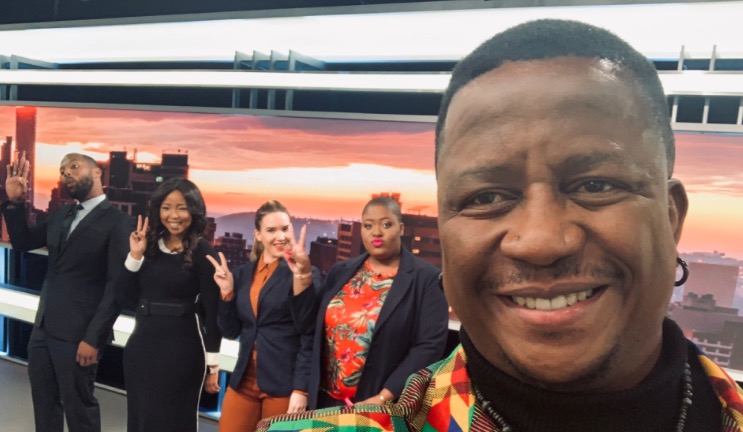 You might not have heard his voice on air for a while but fans of DJ Fresh were ecstatic when he appeared on Newzroom Afrika's morning show, Breaking Dawn.

Fresh appeared alongside Sizwe Dhlomo, Gugs Mhlungu and the rest of the squad on Tuesday morning.

Talking all things current affairs, the hashtag #Freshon405 trended on Twitter as thousands took to the platform to welcome Fresh back into their homes.

Fresh was taken off Metro after a complaint to the BCCSA over 'offensive language.' Sunday World reported he had refused to apologise, an allegation Fresh disputed in a statement released on Monday.

Meanwhile, Twitter has welcomed Fresh (and his colourful jacket) back with open arms, saying he aced his TV 'audition.'

@DJFreshSA should explain the inspiration behind this morning's Ghana themed Jacket, becos Ghana lost last night @Newzroom405 @SizweDhlomo But i must admit, it is FRESH #Freshon405

@SizweDhlomo I think @DJFreshSA must come back tomorrow, it's unconstitutional to judge him on a single episode, we need more. #FreshOn405

HE'S HERE!! 🙆‍♀️🙆‍♀️ SIZWE YOUR JOB IS ON THE LINE BROER!! HE IS NAILING THIS LIVE INTERVIEW... 😉#FreshOn405 @405Mornings @DJFreshSA @SizweDhlomo

Lol yazi my mind is used to having images of @DJFreshSA speaking on radio. Now that I’m seeing him speak feels somehow unusual but very good!😅#FreshOn405 pic.twitter.com/G77q7qbUwf