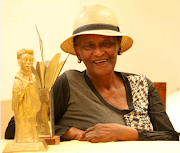 Late veteran actress Nomhle Nkonyeni was well-known for her talent and for grabbing audiences' attention with her characters in TV series such as Scandal on e.tv and DStv’s Igazi, among many others.

She died early on Wednesday morning in hospital, after being admitted on Friday. TshisaLIVE reported that Nkhonyeni died at the age of 77.

Here are three memories of Nkonyeni:

Nkonyeni was born in Port Elizabeth in April 1942 and started her acting career in theatre at the age of 19.

Known for her roles in popular television productions such as Tsha Tsha, Gaz'lam, Scandal and Igazi, as well as the 2004 feature film, Red Dust, Nkonyeni was in the process of establishing an art academy in the Eastern Cape.

First black woman to act in theatre in apartheid era

Her roles in plays such as Die Swerfjare van Poppie Nongena saw her become the first black woman to set foot on stage during apartheid-era SA.

Speaking about that historic moment in her TED talk in 2016, Nkonyeni said: "I was the first black person to perform on that stage and when that door opened, I never shut it."

In 2016, she received the lifetime achievement award from the SA Film and Television Awards (Saftas).

Accepting her award, Nkonyeni said: "It's my dream to leave a legacy behind. I don't want God to ask me when I get up there what I've done with the talent He's given me."