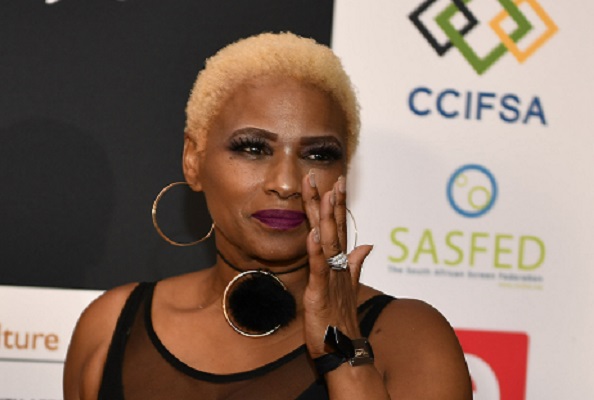 Tina Jaxa says she's never been happier than she is with her Ben 10 bae.
Image: Gallo Images / Lefty Shivambu

Even though their relationship came out in one of the most unfortunate ways, veteran actress Tina Jaxa and her actor boyfriend Fuzile Mahamba, who's eight years her junior, are happier than they've ever been.

Tina has even hinted that she's ready to be his bride.

Tina and Fuzile's love was made public after a cosy video of them was leaked by a "friend" to Sunday World in July.

Speaking to Drum Tina explained that she was most hurt by how the video would affect their loved ones, but never intended on hiding her bae.

Nor was she willing to let bad past relationship experiences dim the light of her new love.

"I’ll never give up on love based on previous love relationships that didn’t work out because I don’t live my life from a point of fear," Tina said.

The actress hasn't always been lucky in love and has had a very public and messy break-up with husband Prosper Mkwaiwa. When Prosper died of an undisclosed illness in 2015, Tina was left to deal with a lot of drama. Prosper was legally married to Tina but was in a traditional union with musician and socialite Tina Dlangwana.

However, it seems Tina has finally found her peace after that ordeal. And, even though she and the hunky Fumani have only been dating for six months, her happily ever after is now a tangible dream.

Tina told Sunday World that he's the one and Fumani echoed her sentiments and said she was everything he wanted in a wife.

"He is the guy I could marry any time," she said.