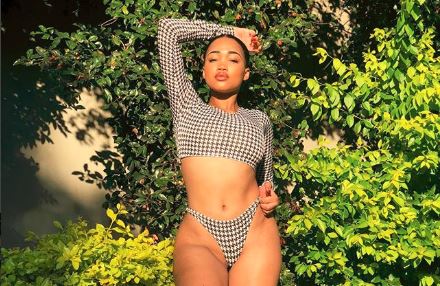 Nicole Nyaba is going into music making.
Image: Via Instagram

It's been a while since Nicole Nyaba broke the internet with her sexy snaps or made a callout on the social media streets about her club whereabouts, which left her fans slightly concerned.

So Nicole came out to explain her absence and it's tied to music.

"I apologise for not addressing this sooner but I haven't hosted parties or events since Feb. I had spoken to my previous manager about taking a break in March and eventually I quit later. I've decided to be an artist and separate myself from hosting gigs because I believe in giving my all to whatever I choose," she said in her statement.

Nicole has said previously that she's interested in music, although at the time she didn't commit to leaving the club hosting life she's become synonymous with.

However, she recently shared a snippet of what fans can expect from her and it sounds like she's headed the Cardi B/New School trap music route.

Nicole thanked everyone who had given her a chance in their clubs as a host and said she's looking forward to the next chapter in her life.

Read the statement below:

Lootlove is determined to work on herself, no matter how 'painful' it is

Zodwa Wabantu takes a bath at a random person's house