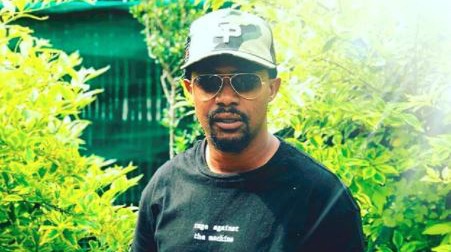 Fans in Botswana will unfortunately not be able to catch the film due to red tape.

While trying to publicise the film, Kagiso responded to a fan who asked about watching it in Botswana.

"Sorry man, we were supposed to be in Botswana next but I am disappointed at the reputation with regard to the films there. It's just sad that one person's botsotsi can affect the whole country. Either way, I hope you will get a chance to see the film."

In the movie, the actor plays a lead role alongside his daughter Tshimollo who made her acting debut on Scandal! at just six months.

Funded by Kagiso and his wife Liza, the film is a South African story about a young successful black man who takes matters into his own hands as he fights for the right to see his daughter.

He kidnaps his own daughter from school, hoping to start a new life in a new city, but all hell breaks loose and he finds himself in a bus "hostage" drama and finally coming face to face with the law.

Losing Lerato is directed by Sanele Zulu and will open in local theatres from September 13.

Ladies and Gentlemen... the official trailer of @losinglerato is out. To watch the full trailer you can go on the YouTube link thats on my instagram profile. Please repost and tag @willsmith ♥️ Losing Lerato out in Cinemas from 13th September ♥️📽🎬🎥 @sterkinekor @numetro #Losinglerato #independentfims #Bakwenaproductions

Five years before actor-producer Kagiso Modupe’s father died at the age of 70, the elderly man visited the grave of his own dad for the first time. ...
News
3 years ago

Kagiso Modupe to his wifey: I love you my rib, my comfort, my home

Kagiso Modupe is totally besotted with his wifey.
TshisaLIVE
3 years ago

Sandy Mokwena was passionate about acting till the end.
TshisaLIVE
3 years ago