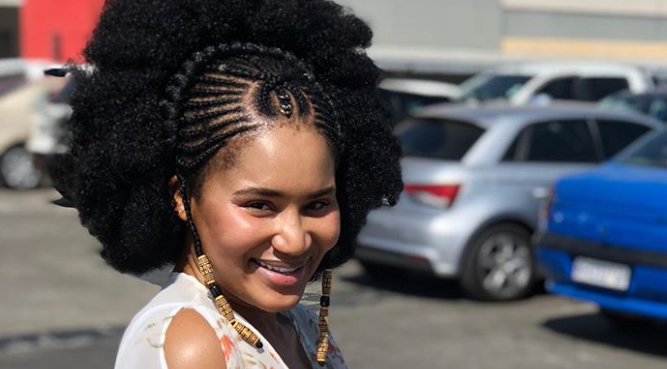 Keke Mphuthi has opened up about her own allegedly negative experience with the Fergusons.
Image: Keke Mphuthi's Instagram

Actress Keke Mphuthi has responded to an open letter by actress Vatiswa Ndara detailing alleged mistreatment by Ferguson Films, recounting her own experience with the production company.

Vatiswa cast the spotlight on alleged "bullying and exploitation" of actors through an open letter which she addressed to arts and culture minister Nathi Mthethwa on Monday.

The letter went viral on social media as users weighed in on the debate around the treatment of actors in South Africa.

Keke starred in two Ferguson films productions, The Throne and Unmarried, and took to Twitter to share her own experiences with the company.

In a series of tweets, she claimed that when she told her bosses she was pregnant, she was given guarantees she would still have a job when she returned.

However, she was told on the last week of shooting that her contract had come to an end.

I was paid til feb only and yet contract ends May 2019. I was so confused,highly pregnant and now a without job . After I had already gotten a new place to stay and sorting out life as my pregnancy came as a surprise.

She said the stress was so great that she nearly lost her unborn child.

Attempts to contact Keke for further comment were unsuccessful at the time of publishing this article. Her management told TshisaLIVE she was meeting with lawyers to prepare a press statement on the matter.

The Fergusons have not responded to Keke's claims. In a statement to TshisaLIVE, their lawyer Brendan De Kooker said he was awaiting instruction from his clients before commenting on the matter.

In her six-page open letter Vatiswa revealed she would not be returning to season three of iGazi, and then detailed some of the alleged conditions of the contract offered to her by the company.

Vatiswa then listed why these conditions were problematic, including how actors were not able to seek further employment until the contract was completed and were allegedly not compensated for work-related activities, including wardrobe fittings, make-up, public relations and media interviews.

She also claimed  the contract allowed for limitless calls, which could see her on set from Monday to Saturday, sometimes for up to 12 hours a day, with no additional compensation.

“This particular interaction with Ferguson Films has not only made me evaluate my own being and sustenance within the industry,” she said in the letter.

Mthethwa acknowledged on social media that he had received the letter and his ministerial spokesperson, Asanda Magaqa, told Sowetan he was considering the contents.

Keke Mphuthi on being a mom: I’d do it all over again just for you

Keke Mphuthi's little prince made his grand entry into the world recently.
TshisaLIVE
3 years ago

Sizwe Dhlomo dragged for 'defending' the Fergusons: 'They took all the risks'

'If cats want to be bosses, they must also pay the cost ke. Not to say that people must get exploited kodwa'
TshisaLIVE
2 years ago