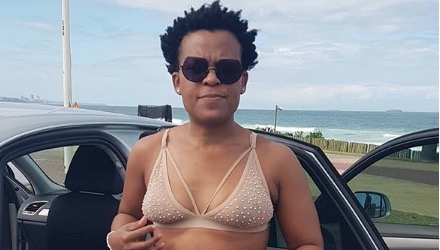 Zodwa Wabantu had fans in fits of laughter, and others fearing for her life, when she uploaded a video of herself cutting grass in high heels while drunk.

Zodwa is used to pushing the boundary and acting a little crazy but she took it to another level when she grabbed the grass cutter and annihilated some, uh, leaves on the lawn.

Sis claimed that she had gone to bed drunk and woke up to do some "duties", and then admitted to fans that she was still "too much" drunk when she grabbed the cutters.

The comments section was flooded with hilarious comments from fans applauding her for her skills and recounting their own experiences trying to do tasks while drunk.

Perhaps the craziest part of the whole exercise was Zodwa's outfit for the task.

Forget about overalls or safety gear, sis was dominating in a fancy outfit, coupled with high heels.

Now just imagine how she does dishes?

I Sleep Drunk, Wake up with Duties Zodwa Wabantu🔥🔥🔥

WATCH | Zodwa has injections to make her cleavage pop: 'I want that summer body'

Zodwa hits back at haters: Prostitutes are people too!

"It is better to eat with prostitutes than judge them. The same society that judges them are the same ones that pay them in secret."
TshisaLIVE
2 years ago

Zodwa causes a frenzy with wedding dress snap, and we have all the tea

It's not what you think.
TshisaLIVE
2 years ago