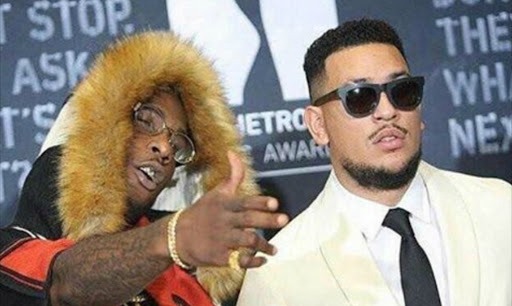 Burna Boy and AKA were once close friends.
Image: File photo

Two months after promising to never set foot in SA again and threatening to “pull up” on rapper AKA, Burna Boy is coming to Mzansi and AKA is waiting.

The pair, who collaborated on AKA's 2014 smash hit All Eyes On Me, had a war of words in September over reports of xenophobic attacks in SA and foreigners fearing for their lives.

In a series of tweets, Burna Boy urged black foreigners living in SA to defend and protect themselves against xenophobic attackers. In a now deleted tweet, he also told AKA to beef up his security, before giving him the middle finger.

So imagine everyone's surprise when it was announced on Wednesday that Burna is actually going to grace SA with his presence in November.

The star is part of the Africa Unite line-up to “unify all Africans and speak out against femicide”.

The concert is presented by the department of sports, arts and culture, in association with Channel O, Monster Energy and powered by Play Network Africa.

“Africans Unite Concert is a collaborative project that aims to rebuild trust and respect amongst African nations by hanging the current narrative to that of unity and solidarity,” the show's organisers said.

Burna's return was not lost on AKA, who said, “I would love to attend this show and watch this man put his hands on me in my own country”.

I would love to attend this show and watch this man put his hands on me in my own country. https://t.co/SyrK5fS1VE

He also said he wanted to see Burna Boy act on his threats and couldn't wait to see him in SA.

Ya vele. He said On Gambo. https://t.co/3JNfqcTOlR

AKA admitted that he might bury the hatchet with Burna but first the Naija star needed to apologise.

“I wouldn't mind at all. He must just apologise so we can forgive him,” AKA wrote.

In a flood of tweets Burna Boy was labelled a hypocrite and told not to come to SA. Some threatened to boycott the show if he was kept on the line-up.

@burnaboy We haven't forgotten!!! Our government is still at sleep
so you better not come here if you know what's good for you. Africans can unite without hypocrites like you. #Msunery pic.twitter.com/6IP2yrlalv

Burna Boy is still wack for fueling that “AKA is xenophobic” misconception.
Also, he’s a hypocrite for accepting a gig in South Africa, less than 4 months after he said he’s never coming to this country ever again. Money talks. 💰

Truth is, I might attend that Burna Boy concert 😕

I’m sorry for being a hypocrite guys

You such a hypocrite maan it's sickening @burnaboy pic.twitter.com/59ZkhR22AU

I like Burna Boy, but if at all he goes to South Africa after all he has tweeted about, then he’s a BIG FAT HYPOCRITE! Mind your words, they always come back to bite you at the end

hands off @akaworldwide!!@burnaboy must stick to his words, he mustn't come to s.a

we don't want hypocrites in our country 🤮🤮

So after all the noise burnaboy was making he still accepted a show in SA??
A hypocrite i stan. https://t.co/XHlKWx14tW