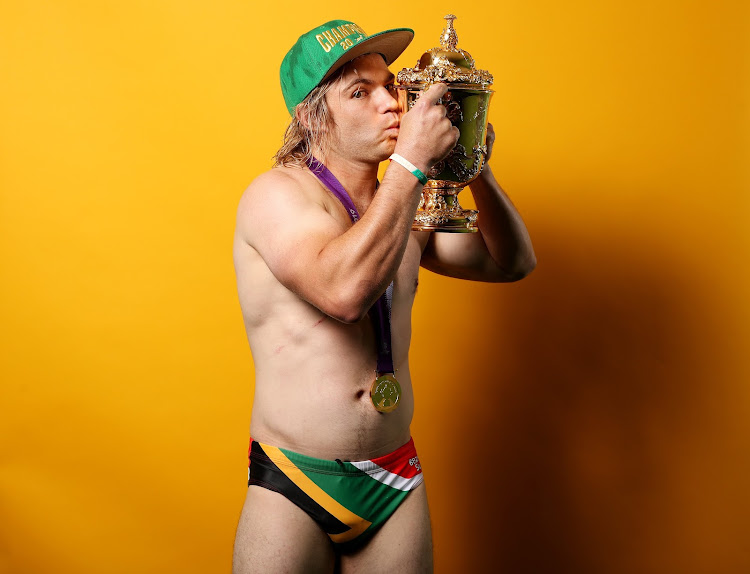 Faf de Klerk has been compared with Zodwa Wabantu for his 'nudity'.
Image: Springboks/Twitter

A debate erupted on Twitter over the weekend about whether socialite Zodwa Wabantu and rugby player Faf de Klerk can be likened or compared on the basis that they have both been half naked in public.

Faf recently made global news headlines after a video of him greeting Prince Harry with just his Speedo on went viral. The British prince went to the Springboks' dressing room to congratulate the team after their Rugby World Cup win against England.

He again showed off his famous Speedo when he pulled down his shorts during the World Cup trophy tour.

A tweep named @ladyj_oy questioned why Faf is considered cool for doing the same thing Zodwa has always done, but for which she has been shamed.

“Hmmm, men just pull down their pants and it's considered cool. When Zodwa does it, everybody wants to throw their worthless penny of an opinion about how women should respect their bodies.”

Her comments were met with mixed responses. Some justified Faf dropping his pants, saying “he just won the World Cup”, while others denied criticising Zodwa.

Hhmmm, men just pull down their pants and it's considered cool. When Zodwa does it, er'body wants to throw it their worthless penny of an opinion about how women should respect their bodies... https://t.co/7Jx7UXhirw

Here's a glimpse into some reactions:

The motivation os Faf exposing his underwear, is 2 promote the brand that makes the swimwear, ppl that buy & then donate R50 2 the company, the company matches that donation to an animal shelter charity...I don't know what underwear brand or clothing designer brand Zodwa promotes

Okay you comparing someone who doesn't wear underwear to someone who's wearing underwear, genius

Really though , the comparison is not on here

But no one has a problem with Zodwa mos... infact we loooove her🤣 pic.twitter.com/Q8POpeD0tb

Zodwa is a national treasure, in fact She's the only one allowed ku men's conference. pic.twitter.com/IgM4CVOKxo

Zodwa Wabantu has some words of wisdom on how to slay every day.
TshisaLIVE
2 years ago

Faf de Klerk has been an internet sensation since the Springboks won the Rugby World Cup on Saturday.
Sport
2 years ago