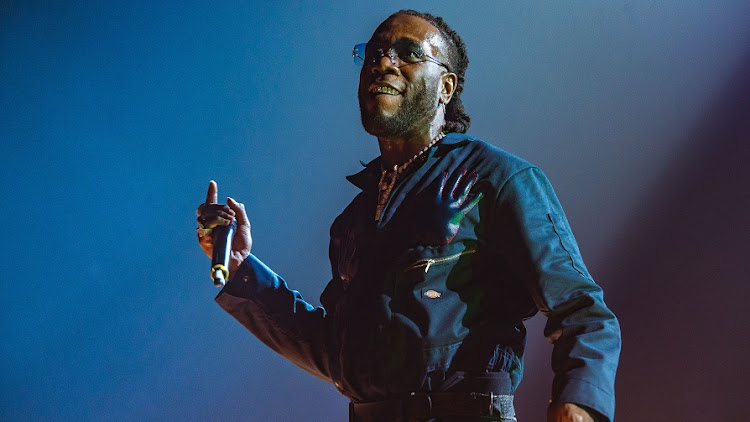 Nigerian rapper Burna Boy is set to perform at a concert in SA later this month after promising to never set foot in the country again.
Image: Joseph Okpako/WireImage

Local musicians and event organisers have objected to Nigerian rapper Burna Boy's inclusion at an anti-xenophobic concert, claiming the star incited hatred with his comments on SA.

In a series of tweets in September, Burna Boy urged black foreigners living in SA to defend and protect themselves against xenophobic attackers. In a now deleted tweet, he also told SA rapper AKA to beef up his security, before giving him the middle finger.

He promised to never set foot in SA again until the government "wakes the f*ck up and  really performs a miracle".

A month later it was announced that Burna would be performing in SA as part of the Africans Unite line-up to “unify all Africans and speak out against femicide”.

Ticket listings and promotional material for the event claimed the concert was sponsored by the department of sports, arts and culture and is organised by Play Network Africa, which, according to its website, is based in Nigeria.

Musicians and event organisers, under the umbrella of Tshwane Entertainment Collective, wrote a scathing letter to the minister raising objections against the concert and calling for the department to pull its sponsorship of the event.

The group questioned the exclusion of artists and event organisers from Tshwane in the process, the lack of financial support for artists from the area, and claims that communities affected by xenophobia are located far from the areas where the concert will be held and cannot afford the ticket prices for the event.

The chief concern was against Burna Boy's inclusion, and the group labelled the event a “financial exercise to benefit the very artists who have our country in a negative light based on false claims”.

"Whoever may have deemed that the country needs a PR exercise of this nature would have done so largely as a result of the callous, misleading and unwarranted incitement by this very artist. Not only did he spread falsehoods through his extensive platform, he literally incited violence and hate," the letter said of Burna Boy, suggesting that government had succumbed to pressure from him.

The department has however distanced itself from the concert and said that it's logo had been used "erroneously" on posters advertising the event.

"The Department of Sports, Arts and Culture wishes to dispel the untrue information currently being spread on social media, that it is funding the Africans Unite Concert featuring the artist known as Burna Boy. It is unfortunate that the department's logo was erroneously used on the poster advertising the event," spokesperson Asanda Magaqa told TshisaLIVE.

Asanda said that the department had not allocated or granted funding for the event.

"The department wishes to reiterate that it has not allocated or granted any funding to the event in question and any reports to the contrary are entirely false."

Play Network Africa co-founder, Kenneth Chicco, told TshisaLIVE that all communications announcing the Africans Unite concert were done with the inclusion of the department.

"The Department of Sport, Arts and Culture is not providing any financial support to Phambili Media or its event partners, Playnetwork Africa to stage the event.

"With recent xenophobic events that have taken place around South Africa, Phambili Media reached out to the department for an endorsement to stand behind the messaging of the event, which is to encourage all Africans to speak with one voice, through music, to drive the goal of uniting our nations.

"We hope that Africans Unite will continue driving meaningful engagements, with the hope that all Africans come together, as one, against xenophobia and gender-based violence."

Meanwhile, Burna Boy has announced he will contribute a portion of the proceeds from the concert to the victims of xenophobic attacks.

"I really hope we can all keep contributing in our own way to make the world a better and safer place for each other. Africans unite, it’s bigger than all of us," he wrote on Twitter.

Rapper AKA responded to the decision by suggesting that most of those contributions will then go to South Africans because they were the biggest victims of the violence.

"So for the most part, he’ll be donating to South Africans. Weird," he wrote.

So for the most part ... he’ll be donating to South Africans. Weird. https://t.co/tjprxaORKr

So now we must pull through with no apology?
TshisaLIVE
2 years ago