AKA wants Burna Boy to apologise: You say you're an African giant, prove it 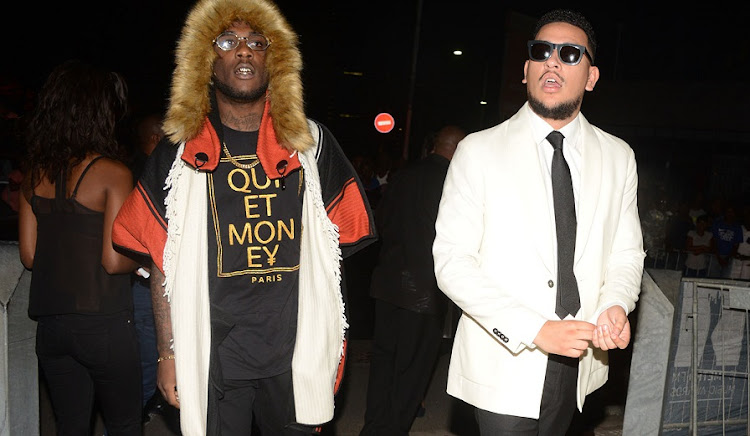 Burna Boy and AKA were once close friends.
Image: Frennie Shivambu/Gallo Images

With just more than a week to go until Burna Boy performs in SA, the Nigerian star has once again come under fire for comments he made about the country, and AKA is still waiting for that apology.

In a series of tweets in September, Burna Boy urged black foreigners living in SA to defend and protect themselves against xenophobic attacks. In a now deleted tweet, he also told  AKA to beef up his security, before giving him the middle finger.

He promised to never set foot in SA again until the government “wakes the f*ck up and  really performs a miracle”. However, a month later, he was announced as part of the Africans Unite line-up to “unify all Africans and speak out against femicide”. The event takes place in Pretoria on November 24.

As artists and event organisers, under the umbrella of Tshwane Entertainment Collective, this week slammed Burna Boy's inclusion on the line-up, AKA took to Twitter to ask him to apologise.

Burna Boy has yet to respond to the request.

The Fela in Versace star said SA took Burna Boy in “before he reached these levels” and challenged the Naija star to prove he is an “African giant” by apologising.

“Ek se ... Burna Boy. All we want is an apology. We know SA is not perfect, but we took you in as our own before you reached these levels. You say you are an AFRICAN GIANT, prove it,” he wrote.

Ek se ... @burnaboy all we want is an apology. We know 🇿🇦 is not perfect. But we took you in as our own before you reached these levels. You say you are an AFRICAN GIANT, prove it.

Leadership. I am willing to swallow my pride and put an end to this division. @burnaboy Are you? https://t.co/pXZTLCZvtG

The SA rapper said he reached out to Burna Boy because he was older and wanted to make sure no harm came to either of them if they visited the other's country.

Because I’m older than him. https://t.co/V2UU9BX7rX

This is not a joke. Mina I still want to go perform in Lagos and make it back safely to my family. Don’t you want the same for him? https://t.co/wCxEJqMCnI

AKA has previously said he will not apologise for his part in a Twitter exchange with Nigerian artists at the time of the xenophobic attacks.

He repeated his stance on Wednesday.

“Woah. I’m not apologising for anything brother. I did nothing wrong,” he told a follower.

Woah. I’m not apologizing for anything brother. I did nothing wrong. https://t.co/a5Wq0u3mTu

Tshwane Entertainment Collective penned a scathing open letter to sport, arts and culture minister Nathi Mthethwa this week, raising objections about the concert and calling on the department to pull its sponsorship of the event.

The chief concern was Burna Boy's inclusion. The group labelled the event a “financial exercise to benefit the very artists who have our country in a negative light based on false claims”.

“Whoever may have deemed that the country needs a PR exercise of this nature would have done so largely as a result of the callous, misleading and unwarranted incitement by this very artist. Not only did he spread falsehoods through his extensive platform, he literally incited violence and hate,” the letter said of Burna Boy, suggesting that government had succumbed to pressure from him.

The department has distanced itself from the concert, saying it was not funding the event and its logo was used erroneously on promotional material for the show.

Africans Unite organiser Kenneth Chicco told TshisaLIVE that all communications announcing the concert were done with the inclusion of the department and while it was not funding the event, its partner, Phambili Media, “had reached out to the department for an endorsement to stand behind the messaging of the event”.

Meanwhile, social media was flooded with memes and messages slamming the decision to bring Burna Boy to SA.

There was a time in SA, I think around 2015, we had to seat down as a country and discuss which tribe is gonna adopt Burna Boy? Since he had no intention of going home. pic.twitter.com/MhxF4NIpmZ

#Burna Boy . He must go unite with his naija ass. We don't want him here . @burnaboy pic.twitter.com/VZgn6S8L0h

Burna Boy must not come here. He is a trouble maker. pic.twitter.com/oDvY4SKDJb

As I wait for Burna Boy to say absolutely nothing!!!! pic.twitter.com/yjPOjPu123

The concert is sponsored by the Department of Sports, Arts and Culture and is organised by Play Network Africa, which according to its website is ...
TshisaLIVE
1 year ago

So now we must pull through with no apology?
TshisaLIVE
1 year ago

Burna Boy says he will never set foot again in SA "for any reason until the South African government wakes up".
TshisaLIVE
1 year ago