Ntsiki Mazwai to MaMkhize: Poverty in mind and spirit makes you show off money 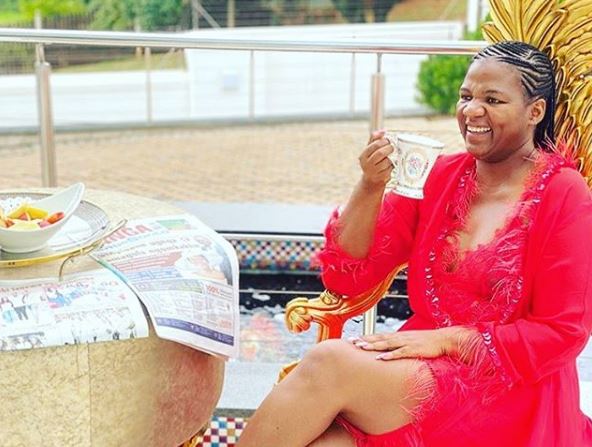 While the rest of the nation finds itself marveling about Shauwn Mkhize's life and wishing they had even just a tenth of her millions, Ntsiki Mazwai is seemingly unimpressed by her choice to “show off” her riches.

The poet, who has been sharing her unsolicited opinions about MaMkhize since her reality show made its debut, took to Twitter yet again to let the world know  she believes people who are “poor” in “mind and spirit” are the ones most likely to show off.

“Poverty in mind and spirit makes you show off money. The other wealthy people can handle their money without needing our validation as an audience,” she said.

Ntsiki said she wasn't inspired by Shauwn's come-up story, and was even more disappointed that she had allegedly got her riches through political connections.

I wasn't interested in this topic before they put it on tv and gave me a chance to unpack how they got rich and what they are doing with their wealth.
And I'm not learning anything of value.#KwaMamMkhize

If you had enjoyed your money in peace......i wouldn't know that it's anc connections

The poet previously said it seemed very unnecessary for three people to live in a house as big as Shauwn's.

“I think I'm trying to understand why you need such a big house. It fulfills what purpose? Three people living in a house as big as a school, instead of building a school, speaks to our level of vision as blacks.”

But while Ntsiki went on about “how” Shauwn made her money, tweeps only cared that she's rich enough to hire Asian help, among other things, like how ridiculously lavish her life is.

Check out the mixed meme reactions:

Shawn hired Asian helpers with her not so perfect English...😂😂😂 pic.twitter.com/auBY4kaVvM

I don't really think make-up is an issue here.... at some point we need to see people with no mask or make-up. It's actually authentic for the show to show us that part. No one wakes up and jumps into make-up every morning no matter how rich or wealthy you are! #KwaMamMkhize https://t.co/gPeJSbjTKQ

#KwaMamMkhize English Is Not Needed For Securing The Bag💛 pic.twitter.com/Zr7pqFFp2w

First time I watch this show and The only thing I witness here that gets people excited is that this people are filthy rich...otherwise it's overrated and hyped up for nothing#KwaMamMkhize pic.twitter.com/IRiq6lqonj

'Are you ever gonna build a school?' - Ntsiki Mazwai takes shots at Shauwn Mkhize

"When black people make money they operate from poverty consciousness. They do crazy things with money instead of building with it"
TshisaLIVE
2 years ago

Hai no... we have all accompanied the Mkhizes in this life thing
TshisaLIVE
2 years ago

While thousands of South Africans lapped up a fly-on-the-wall view of controversial tenderpreneur Shauwn Mkhize’s life when her reality show debuted ...
Lifestyle
2 years ago