LISTEN | Sjava on being 'barred' from burning imphepho on stage 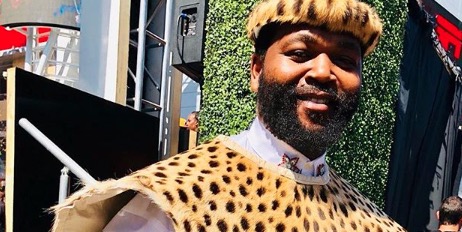 Musician Sjava has opened up about the challenges he has had to overcome to represent his culture on stage, claiming he was barred from burning imphepho on stage at his “One Man Show” and told not to wear traditional attire ahead of the BET Awards in America.

Sjava sat down with Ebro Darden during the Apple Beats 1 radio host's trip to SA and spoke about his rise to fame.

In a podcast of the interview, Sjava touched on his One Man Show in October last year and revealed that he was told he could not burn imphepho on stage.

“I remember like 20 minutes before (the show started) ... I asked one of my guys, 'can you please go put it on stage, before we start so that it keeps away all the bad vibes?' They were like no. It was so small but they were like, 'nah, you can't' ... they said it will put the whole building in danger. I was like you have flames coming out of the stage and you're complaining?”

After a back and forth of Sjava putting it on stage and them removing it, Sjava decided to just walk around with it in his hand.

The star won over fans across the world when he won a BET Award in 2018, sporting a traditional outfit to the ceremony.

He said people tried to talk him out of wearing his traditional attire in the build-up to the awards because they believed he would embarrass himself and the country.

The musician remains undefeated as the flag bearer of proudly South African, and told Drum that he was grateful to share his culture on an international stage.

“They were so fascinated. That made me realise we, as Africans, need to appreciate our own things and not take anything for granted.”

He also announced to fans on social media last year that he would take a Phuzekhemisi Mnyandu collab over one with Drake.

“As I was sipping it just hit me, Drake is amazing and he is the biggest rapper in the world but I am trying to get uBaba Phuzekhemisi Mnyandu in studio right now,” he wrote on Instagram, next to a pic of him drinking umqombothi.

Sjava: Why must I hide that I use muthi?

'Why must it be an embarrassment or why must I hide that I use muthi when I am a black person?'
TshisaLIVE
1 year ago

Sjava: Perhaps I should have been a pilot

"Then again, I thought maybe if I became a pilot I would have crashed in a plane and died"
TshisaLIVE
1 year ago