DJ Zinhle gushes over Pearl Thusi: It's so nice to have sisters around you, who believe in you 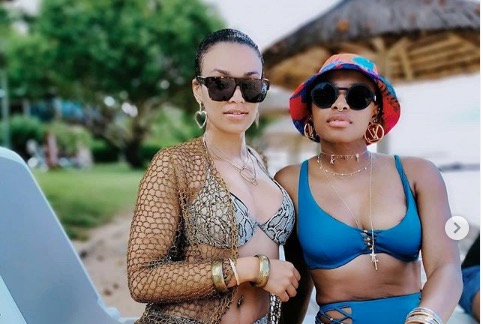 DJ Zinhle has opened up about her friendship with Pearl Thusi, detailing how the besties have been there for each other through thick and thin.

Pearl was recently the toast of Mzansi at the premiere of Queen Sono, Africa's first Netflix original series, and Zinhle was there to celebrate with her.

Zinhle told TshisaLIVE that Pearl was ruling the world at the moment and she couldn't be prouder.

“This means that we can compete with the world, we have quality art that we can put out to the world. This is evidence of what we are able to do, and for my friend to be at the forefront of that is amazing!”

She said that Pearl had been there for her through thick and thin and she wanted to honour her.

“It's so important for us because we get to share these moments ... It's so nice to have sisters around you, who believe in you, who know how it started, who are proud to share such a big moment.”

Pearl plays the role of Queen, a no-nonsense spy, in the six-part action series.

Queen Sono was produced and directed by SA's Kagiso Lediga and filmed in 37 locations across the continent. It also features several dialects, including Afrikaans, Russian, Xhosa, Zulu and French.

The celebs have been a lot this week, hey!
TshisaLIVE
2 years ago

Pearl Thusi is paying tribute to her bestie, DJ Zinhle.
TshisaLIVE
2 years ago

Looks like school was in session...
TshisaLIVE
3 years ago