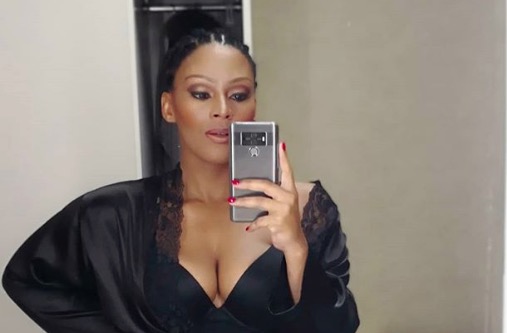 Actress and singer Letoya Makhene has penned a heartfelt letter thanking her father for his support of her relationship with businesswoman Lebohang Keswa.

Letoya's relationship hogged headlines earlier last month after Sunday World revealed that she was dating Keswa. Speaking to the paper, Toya said she was hesitant to reveal her new romance to her father, veteran musician Blondie Makhene, because of what he might say.

“My biggest fear was telling my dad and my children that mommy is in love with a woman. I was afraid of hurting them,” she said.

But Blondie has blessed their relationship and, in a letter addressed to her father, Letoya thank him for his undying support and advice.

“You know how much I've dealt with in my journey through life, daddy. How many times I've been told to repent and forsake my ancestors — for hell surely awaits me. Now — as we predicted — the same people are telling me once again that hell awaits me because I've finally found everything that I've ever prayed for in a lifelong partner.

“Thank you daddy for the blessing you gave us. Yours and God's is the only blessing that matters,” she said.

The actress also share some intimate details about the path that led to her finding Lebohang.

“It's crazy how the universe works. I put in the work. Realigned myself with the universe and watched my prayers come to fruition. The one thing that I could never have predicted is that the kind of love that I prayed for would be wrapped and packaged in the form of a woman.”

Letoya explained that she took a lot of time conversing with God about her new found love. After questioning why it came the way it has, God gave her two options.

“He (God) gave me two choices. One was to receive his gift of love as is, the other was to walk away and lose myself bit by bit to men who will never really understand or honour me because of the power that I possess through the gifts that he has given me.”

"Being with you really makes me feel peaceful and content," Lebohang said to Letoya.
TshisaLIVE
2 years ago

Letoya said she was tired of having to dim her light in order to coexist peacefully in a relationship.

“Society has taught our men that the woman by their side needs to understand that she answers to him. That she is there to serve him and to not so much as question him when he does wrong. See, as humble and as respectful as I've always been, daddy, I honestly have always battled with this concept.

“Only you know the dark truths behind my past relationships, dad. Now I lay in the arms of a woman who honours my being, a woman who sees and appreciates me because I am a woman. Someone I will never have to pretend to be less than because my power makes her feel insecure,” she said.

Letoya Makhene slams relationship haters: Nothing has changed my love for Lebo

"A couple of days later, a million messages of congratulations and not forgetting the nasty naysayers and guess what? Nothing's changed. I love you ...
TshisaLIVE
2 years ago

These celeb are happy that Letoya and Lebohang can finally freely express their love for each other.
TshisaLIVE
2 years ago

Letoya will soon make her new song 'Ngihawukele' available on all platforms.
TshisaLIVE
2 years ago