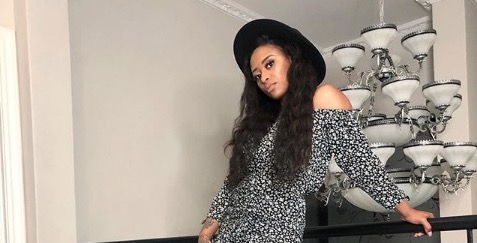 After being in the music industry for more than a decade, DJ Zinhle has opened up about the thought process that goes into composing songs and how this includes her unconditional love for her daughter Kairo.

Zinhle was a guest on Brands & Thabs YouTube web series, Drive-Through With, where they put her in the hot seat.

During their drive about, probably shot before lockdown, Zinhle expressed how she related to her song Against The Grain with Bonji opposed to Uzobuya, as it had more meaning for her love for her baby girl.

With the lyrics being about the extent a person would go to if her love interest gave her the chance to be in a relationship with them, Zinhle revealed that the song reminded her of the unconditional love she had for her daughter as opposed to a romantic interest.

“I relate more to Against The Grain because it is a deep and insane song. Whenever I hear the song, I don't think of a romantic kind of love ... I normally just think of Kairo. Like, that type of unconditional love, that pure love, for me I like the song because it talks more about Kairo.

“So, on the record, that song speaks about Kairo.”

After being in the game for 15 years, Zinhle also spoke about how grateful she was to have a long-standing career to which she compared to a “whole teenager”.

“When you're in the industry of making music and being a good consistent DJ, though it feels long, seeing that I've been about for 15 years ... I don't know how I kept it going for 15 years when there are people who can't even hold on for five years.

“So, I've been very lucky to have been doing this for this long ... I'm grateful that I was able to gradually build myself up to where I am today. I feel like I have come full circle and I'm at my peak of my career ... like everything is aligned.”

While being a DJ who's always on the go, Zinhle expressed how her baby girl has grown smarter in how she negotiates with her when she has to go away for gigs.

Earlier this year, Zinhle revealed that negotiating things with her little star-in-the-making was becoming more difficult as she grows.

Taking to Twitter, she said: “Negotiating things with my child is becoming more difficult the more she grows. Going to work has never been this hard. She is not hearing it these days.”

Previously speaking to The MVP Club, Zinhle explained that she was blessed to be raising a child like Kairo.

“She's very independent, super-kind, very affectionate, very decisive — more decisive than me. I don't know where she gets it. I'm a new parent so I don't know if we taught her that or whether she came like that.

“She's super-independent and I think the independence comes from how Kiernan and I are just always on the road and always at work.”

DJ Maphorisa says he’s not affected by lockdown piracy: 'It's 2020 what the hell is piracy anyway?'

But a study finds his music is among the most downloaded illegally.
TshisaLIVE
2 years ago

Worldwide! DJ Zinhle to host her own Beats 1 One mix

Lockdown just got so much better
TshisaLIVE
2 years ago

SPONSORED | Party online this weekend with DJ PH and DJ Shimza, and the rest of Mzansi, using the DStv Now app
Lifestyle
2 years ago