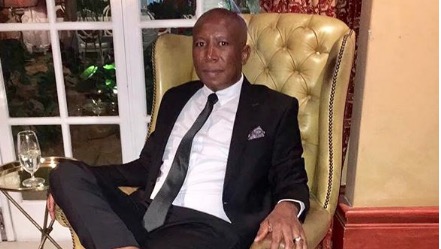 EFF leader Julius Malema relates to sage advice from Idols SA judge Somizi Mhlongo about choosing the right friends, and is ready to put it on preach mode.

The politician took to Twitter this week to share the observation which was shared by a follower who watched Somizi’s wedding special earlier this year.

In the show, Somizi spoke about choosing a best man and said his most important criteria was selecting someone who was not trying to compete with him.

“I watched Somizi and Mohale’s wedding for the first time on Tuesday. Somizi said something interesting when asked why he chose Thabo as his best man. He says it is because Thabo has always been there for him and he is loyal, but above all he doesn’t want to be like him.

“He went on to say we must be careful of friends who want be like you,” the follower shared, adding that friendships should be based on a diversity of qualities and personalities, not people wanting to be the same as each other.

Julius shared the message, alongside the caption: “Not my handwriting”.

Not my handwriting @somizi pic.twitter.com/bJXQMQnTRw

The post drew reaction from hundreds of users who weighed in on the matter.

Many applauded Somizi for this “wisdom”, while others shared their experiences of toxic friends.

From Nubian queens to red bottoms, Somhale's wedding special is going to be lit!
TshisaLIVE
2 years ago

Some political parties outchea bless their celebrity day ones with money.
TshisaLIVE
2 years ago

Oskido hails EFF plan to help 'their artists' in need

If your faves have shown support for the EFF from day one, they will be covered financially.
TshisaLIVE
2 years ago