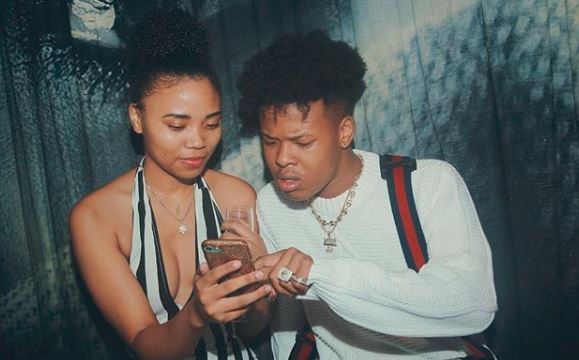 Sammie and Nasty C have been together since high school.
Image: Instagram/SammieHeavens

A video of Nasty C's girlfriend Sammie jamming to A-Reece's music recently caused chaos on Twitter streets as Nasty's loyal fans felt Sammie has no "right" to enjoy music made by a man who is her boyfriend's nemesis.

In the video that dominated the timeline earlier this week, Sammie can be seen vibing to A-Reece's hit track Paradise while the muso performs live in the background.

A fan from #TeamAreece decided the video was great ammunition to use against #TeamNastyC fans.

"If Nasty C girl can vibe like that to Reece music then who are Nasty C's fans?" the video was captioned.

Sammie took to her Instagram stories to set the record straight.

"People don't feel comfortable with me listening to other rappers' music or me liking their music or me being present at their f***** show... People just have problems okay," she said.

"But it's fine. It's okay, I will listen to my rapper's music and only my rapper's music. And it's fine. I won't listen to other rappers or go to their shows. It's fine, I won't listen to their music, or download their music. I won't follow them on Instagram or like their tweets. I won't even see their names on Twitter because I will block their names. Because oh my gosh, my phone had this person's name, God f***** orbid," she said sarcastically.

Check the video below.

Sammie, who is Nasty C's long time girlfriend, also admitted she felt the world knew way too much about her relationship with her rapper bae.

And Nasty C having rapped about cheating on her didn't make things any easier.

Sammie opened up about how she was most annoyed by the people who told her she should have expected Nasty C to cheat because he's a rapper, and that's apparently what "rappers do".

Nasty C is a proud member of the Pearl Thusi defence force.
TshisaLIVE
1 year ago

It wasn’t me! A-Reece denies ties to 'Sotho Man With Some Power'

A-Reece categorically denounced 'Sotho Man With Some Power' as a fake body of work.
TshisaLIVE
1 year ago