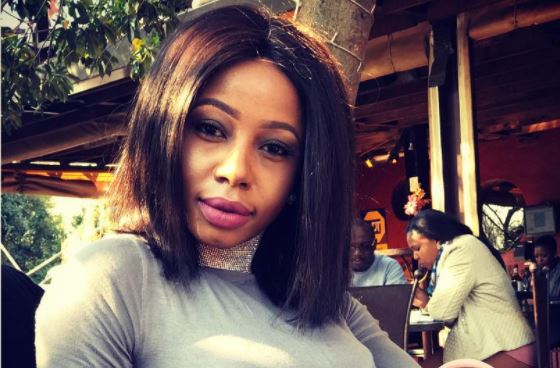 Kelly Khumalo's latest call to police to conclude investigations into the murder of her daughter's father and former Bafana Bafana goalkeeper, Senzo Meyiwa, left many waiting for more information from the singer.

Kelly clapped back at a Twitter user on Monday night who tweeted that they hoped she could drink more alcohol to lower her inhibitions and allow her tongue to "slip" and reveal information she has not  previously shared.

When Kelly saw the tweet, she quickly told the person not to get his hopes up.

The tweet was prompted by Kelly's candid video posted to her Instagram page over the weekend about how she needs Senzo's case to come to an end.

It's been six years since Senzo was gunned down at Kelly's family home in Vosloorus during an alleged house robbery in 2014. There have been no arrests made in the case to date.

“The matter of my daughter’s father needs to be put to an end. It has been six years. I have been a victim of this matter for many years and I am tired. I am going to speak. I am no longer afraid of speaking.”

Kelly Khumalo on justice for Senzo Meyiwa: I am no longer scared to speak

"The matter of my daughter’s father needs to be put to an end. It has been six years. I have been a victim of this matter for many years and I am ...
TshisaLIVE
2 years ago

On her TL on Monday night, the songstress made it known she was no longer afraid to speak. She said she would no longer hide behind her music, and said the events of the past six years had taken a toll on her.

"Where do you think the past six years of mockery has gone to? I’m only human," she said.

Pardon me if I can no longer hide behind singing any more. I cannot sing at this moment as you would wish for me to do so. Where do think the past 6 years of Mockery has gone to? I’m only human

If pulling an accent with a glass of Gin helps me to vent all my frustrations. So be it.

Sing, take care of your kids, do this and don’t do that... I’m exhausted you have no idea what I have survived to be who I am today. So excuse me if I’m not jumping for joy on your advices.

Kelly Khumalo has constantly had to defend her name about ongoing accusations that she's responsible for the death of Senzo Meyiwa,
TshisaLIVE
2 years ago

The Controversy queen wants answers regarding her portion of the artists' relief fund.
TshisaLIVE
2 years ago

I guess South Africans will have to wait a little longer till we can see Kelly Khumalo's reality show.
TshisaLIVE
2 years ago