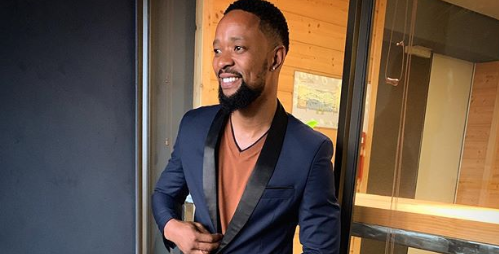 Actor SK Khoza is grateful to have his mentor, co-producer and fellow actor Shona Ferguson to put him straight on certain things.

Things have been looking up for SK who caused excitement on the socials when he confirmed that he'd be making his way back to The Queen to act the role of Shaka again.

In what viewers described as an unexpected “plot twist” to the telenovela, SK seems to be loving the idea of being back on set with his fellow co-stars, moreover his mentor Shona.

Taking to Instagram with a snap of himself and Shona, SK shared how grateful he was for the bond he had with his boss and for him always being there to give guidance and uplifting words.

“Thanks for the real talk Shona and opening up to me. Our chat spoken with a thousand or more words really touched me. Salute Mr Sho, it was great knowing we both needed that. Many of these timeless sayings also recognise the concept of a higher brotherhood that unites us.”

Thanks for the REAL TALK @ferguson_films and opening up to me. Our chat spoken with a thousand or more words, really touched me. Salute Mr Sho, it was great knowing we both needed that. Many of these timeless sayings also recognize the concept of a higher brotherhood that unites US #FAMILIA #BROTHERHOOD #RESPECT #TEAMWORKMAKESTHEQUEENWORK

Now fans are gearing up for a resurrection storyline that will see their fave come back from the dead.

This comes after his fans thought they had failed Shaka when petitions to have SK rejoin the telenovela were initially rejected.

In a statement sent to TshisaLIVE on behalf of Ferguson Films, Connie and Shona Ferguson both expressed excitement that SK was part of the cast even though there was a negative narrative that has surrounded almost all the exits of the main characters on the show.

Touching on the recent negative narrative topic, Shona said, “There has been a negative narrative driven around some of the characters that have left the show. I suppose that is testament to how invested people are in our characters and our stories, and more importantly in the show itself, The Queen.

“The reality is that in the nature of storytelling, especially in long form, characters come and go. Some are designed to stay for a foreseeable future, and some to serve a specific story arc, exit and maybe return at a later stage, depending on how the story develops. This is the case with all shows, and is not exclusive to The Queen.”

"This is my first telenovela. I’m excited and still pinching myself. The best way to put it is to say the gods have chosen to favour me."
TshisaLIVE
1 year ago

"I can’t wait to get back to set and start causing some serious damage."
TshisaLIVE
1 year ago

At least the dynamic duo that is Shaka and Brutus will be returning to the small screen!
TshisaLIVE
1 year ago

"For people to see new characters, somebody has to go."
TshisaLIVE
1 year ago